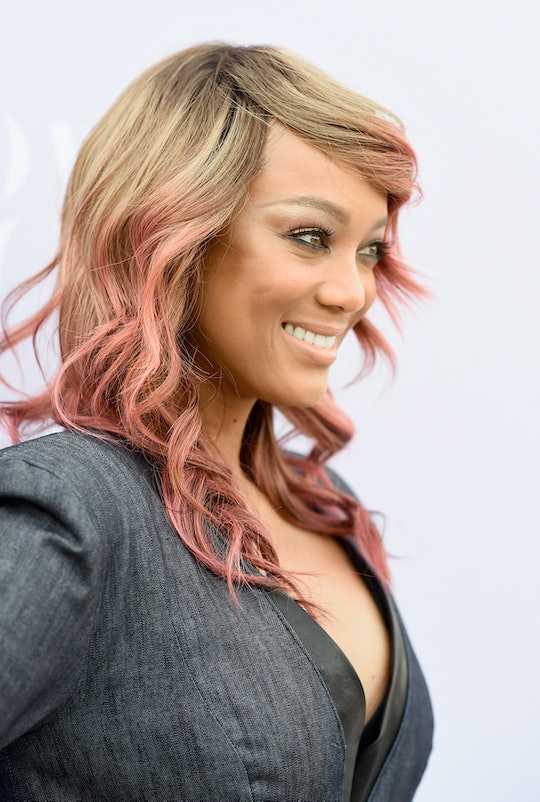 Model and entrepreneur Tyra Banks just shared the most heart-warming Valentine's Day picture known to mankind. The photo of Tyra Bank's baby, York, is way too sweet, and her caption for the snapshot was even better. "This is the Happiest Valentine's Day of my life," Banks wrote in the Instagram post. "York, Daddy @erikasla and I send you so much love." Cutest Valentine ever? Probably.

Banks and her boyfriend, photographer Erik Asla, surprised the world by announcing York Bank Asla's birth on Jan. 27. One definite benefit to having a baby using a surrogate, at least for a celebrity like Banks, was being able to bypass the storm of media that would have surrounded her pregnancy. But the number one benefit by far? Being able to have their child. Banks spoke to People just last year about her pregnancy struggles at age 41. "When I turned 40, the one thing I was not happy about is that I did not have kids," she said in an interview last September. "When you're like, 'OK, I'm just going to do it,' then it's not so easy as you get older."

However, after several tries with IVF, it seems things worked out with a surrogate, and Banks posted a picture of a baby's toque along with the caption,

It looks like 2016 has treated Banks and Asla incredibly well. This picture of baby boy York has been, I'm sure, well-received by fans who were surprised with the birth news just over two weeks ago. I also love how open Banks has been about her fertility struggles, which helps open up the conversation for women around the world.

Banks has accomplished a lot in 40 years: She's a model, producer, show host, CEO of TYRA Beauty, actress, author, and businesswoman. (I mean, has she been busy or what?). I'm positive she'll kill it as a mother, as well. In her People interview, she described the kind of mother she'd like to be, and I think the future bodes well for little York:

I hope [for kids]. I don't just want one child. I want a litter! And I want to be the kind of mom where my child can come to me for anything.

It's definitely a happy Valentine's day for the Banks-Asla family. Here's to wishing them the best (and crossing our fingers for more adorable pictures!).