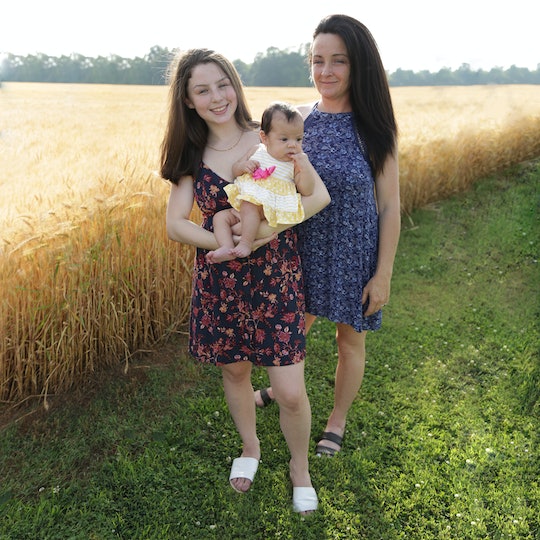 Season 3 of TLC’s reality series about teenage mothers, Unexpected, introduced viewers to Tyra, an 18-year-old committed cheerleader pregnant with her first child. But Tyra’s situation differs slightly from many of the other girls on the show because not only was Tyra’s mother a teenage parent, she comes from an entire family of teen parents. Shortly before Tyra announced she was pregnant, her 16-year-old younger sister, Tiarra, had just had a baby of her own. And around the same time, the sisters’ teenage cousin Taylor had also had a baby — and Taylor’s mother had her first child as a teenager as well.

However it may look from the outside, the family is adamant that none of this was planned. In an interview with Romper, Tyra, Tiarra, and their mother, Melissa, all say emphatically that despite appearances, and despite the fact they, of course, would not trade their children for anything, they didn’t choose this. Tyra plans to do everything in her power to keep her own daughter, 5-month-old Layla, from becoming a teen mother herself one day. But there’s no denying the fact that being teen mothers changes the dynamic for all three of them. It can bond them together, but it can also cause tension. And from Melissa, it draws a profound sadness while she is simultaneously proud of her daughters for the mothers they’ve become.

It's not necessarily unusual for multiple people in one family to become teenage parents. In fact many studies suggest that young women whose mother or sister had a child as a teenager are more likely to become teen parents themselves than those who don't have a very close relative who had children before adulthood. On Unexpected all of the teen mothers featured are daughters of teen parents.

Tyra and Tiarra seem to have the kind of relationship everyone hopes to have with their sister. Tiarra, who is two years younger than Tyra, had her daughter Ella in 2018. No sooner was she born than Tyra announced her own pregnancy. The timing, in particular, was difficult, Tiarra says. “I think it was just harder because I had just had a baby too... then like four days after, [Tyra] found out she was pregnant," Tiarra explains, saying perhaps it would have been easier news for her to hear at another time.

But now, she says, it’s on them to be the grown ups because they have daughters of their own.

But this feeling doesn’t come from a sense of jealousy or resentment, Tiarra clarifies, and it wasn’t that she was disappointed in or angry with her sister. “I knew how my mom felt about me, and then to have her feel that way all over again with Tyra…”

Melissa says her girls are great moms, but admits she still cries every time she talks about it. Her own situation as a teenage mother was different from her daughters’, but she’s teaching them some of the hard truths she had to figure out on her own. “I had my son when I was 18. And I moved out of my parents’ house and I’ve taken care of myself ever since,” she says. Before Tiarra and Tyra were mothers, Melissa describes constantly running around taking care of them.

But now, she says, it’s on them to be the grown ups because they have daughters of their own.

"I will watch my grandkids any time, but like… OK, so if Tyra and Alex wanted to go out on a date or something like that, yes. But as far as them wanting to go out with their friends or do this, do that, no. Because you have to grow up now... your friends are still important, but if you can’t include your baby, then you shouldn’t be with them anyway."

Tyra is taking lessons from her own childhood in deciding how she’s going to raise Layla. Not having a dad around, Tyra says, meant the girls' mom "really tried to be [their] best friend," and "any mistake that I made, I knew she’d be there by my side." And while Tyra respects all the work her mother put in — filling the roles of both parents, working several jobs at a time, and giving Tyra and Tiarra all the love and support they needed — Tyra still wants to do things differently. She wants to be stricter, perhaps. Anything, really, that might prevent Layla from making the same mistakes she did. But what does that look like? It's clear Tyra doesn't entirely know yet.

"When I say that I want to be more strict with Layla, it’s just me thinking about every possible way that I can raise her to not do what I’ve done. So, not like I'm not gonna show her all the love and support that my mom showed me, but maybe… just anything that I can do where she doesn’t end up pregnant at a young age. And of course I can't teach her that, because I was pregnant at a young age, so."

Editor's note: an earlier version of this post misidentified the airtime for Unexpected. It has been corrected.