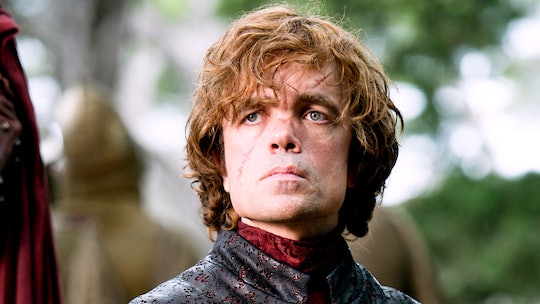 One of the most beloved players of Game of Thrones, Tyrion Lannister himself, should always be safe from the same fate too many of his fellow men and women from seasons past have faced, right? We should all know by now that when it comes to the throne, no one is safe, and if that has you wondering if Tyrion will die in Season 6, then you have every right to worry. I believe it was his own sister who once said, "When you play the game of thrones, you win or you die," letting us know early on that there is no one exempt from G.R.R. Martin's wrath. Red Wedding, anyone? Well, if these Tyrion Lannister theories for Game of Thrones Season 6 mean anything, they certainly proves that this season is going to be monumental for the main character.

With all of this R+L=J hoopla running around Reddit and the internet in general, it's easy to forget to worry about, or think about, everyone else in Westeros that we love. And yes, somehow that includes Tyrion, even though we should never forget about one of the most morally sound people in the Seven Kingdoms. And no, getting rid of Shae and doing in his dad on the toilet do not count against him. They had it coming, right?

Like I said though, there are plenty reasons to think about Tyrion's fate as Season 6 of Game of Thrones approaches, since it may very well be the penultimate season (or at least the last one with the right amount of episodes). When you think of it that way, no one is safe and all bets are off. Will Tyrion die in Season 6 of Game of Thrones or will he be as safe as ever? Just consult one of the many Tyrion theories floating around to help you figure out your stance.

He Will Have A Daughter

Okay, I'm totally with you on the "WTF?!" train, because yes, this comes way out of left field. How can Tyrion even find time to raise a kid when he is apparently co-running Meereen with Lord Varys now? We all know how he could find the time to father one, since he probably garnered Little Finger a small fortune with his many trips to the brothel of Flea Bottom, but to actually raise a kid? In the books, Penny is already very much a part of Tyrion's life and had even went with him to Meereen, eventually developing a crush on him. Because, you know, bloodlines are no issue in the world of Game of Thrones.

Tyrion Is A Targaryen

Yes, him too, because apparently Jon Snow isn't enough. The theory goes that Daenerys's father, the mad king everyone is always going on about, fell in love with Joanna, Tyrion's mother, and even slept with her on her wedding night to Tywin. Flash forward a few months and, as the theory says, Joanna and the mad king are still doing it and she gets pregnant with his baby, later to be named Tyrion, giving him Targaryen blood, the blood of the dragon.

This also makes him Dany's brother, which is a huge step up from Viserys. In the books, Tyrion is described as having the white-blonde hair of a Targaryen, too, further cementing the possibility of this theory to be true. Of course in the show, that may have been too telling, but the facts and theories are there.

While there is no surefire way to know who is going to be slaughtered off of Season 6 of Game of Thrones, it is plenty possible that it could be anyone since the last five seasons have shown us just that. And since G.R.R. Martin loves doing away with the characters we love the most, it would only make sense, right? In an interview with HollywoodLife.com, Martin said that while he loves Tyrion and he is an easy favorite for him to write, he probably isn't safe either.

"I want to be on the edge of my seat. So, the deaths are important and at all times necessary."

There's also the matter of wondering what else they can do with Tyrion, if all he is doing is running Meereen in the Khaleesi's absence. So, all bets are off for Season 6 of Game of Thrones, anything could happen with Tyrion Lannister and his fate could be something as grandiose as being related to the family who has the truest claim to the throne, or dying before his much more deserving sister.