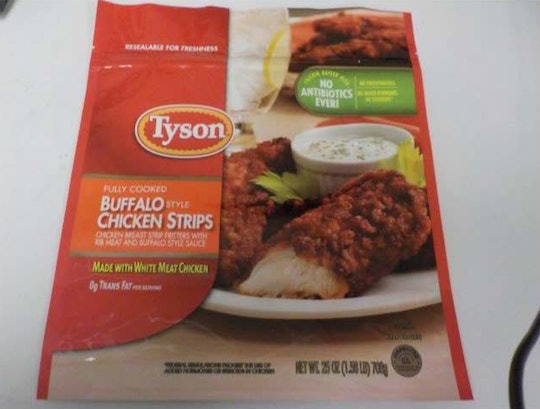 Tyson Recalled 69,000 Pounds Of Chicken Strips As They May Contain Bits Of Metal

If your child is a fan of frozen, ready-to-eat chicken strips, then you'll want to have a close look in your freezer. On Thursday, Tyson announced a recall on chicken strip products because they may be contaminated with pieces of metal. Along with the U.S. Department of Agriculture, the company is urging customers to toss any affected bags of chicken tenders they may have at home.

In a press release from the USDA's Food Safety and Inspection Service, the agency announced that "approximately 69,093 pounds of frozen, ready-to-eat chicken strip products" could potentially have bits of metal mixed in. The batches recalled were produced on Nov. 30, 2018 and have an establishment number of "P-7221," as stated on the recall notice.

"FSIS is concerned that some product may be in consumers' freezers. Consumers who have purchased these products are urged not to consume them. These products should be thrown away or returned to the place of purchase," the press release said.

According to the press release from the FSIS, the possibly contaminated bags of chicken were shipped to retailers across the country, and to institutions in Michigan and Washington. The FSIS said it and Tyson were made aware of the issue after receiving two consumer complaints about metal in its chicken strips.

While multiple customers have complained about pieces of metal in their chicken, fortunately there have been "no confirmed reports of adverse reactions due to consumption" thus far, the FSIS said in its release on the recall. Should you have any immediate health concerns, the FSIS and Tyson urged consumers to contact their health care provider.

You can see images of the labels for the recalled products here.

Romper reached out to Tyson for comment, but received no additional information regarding the recall.

This isn't the first time over the past year Tyson has had to pull chicken products due to possible contamination. In June, The Atlanta Journal-Constitution reported that 3,000 pounds of Tyson uncooked, breaded original chicken tenderloins were recalled amid fears the breading may contain plastic. Officials from FSIS said in a statement the chicken may be contaminated with "blue and clear soft plastic." No injuries or illness were reported, but officials warned restaurant owners — the main buyers of said chicken products, according to the agency's statement — to check for, and toss the products if found.

In January, the company announced a recall of 36,420 pounds of chicken nuggets amid concerns they may contain rubber, CNN reported. Like the current recall, Tyson was alerted to the issue after receiving several complaints about an "extraneous material, specifically rubber," the news outlet said. In a statement released on its website, Tyson said health officials were urging consumers to toss bags of Tyson White Meat Panko Chicken Nuggets produced on Nov. 26, 2018, around the same time the currently recalled nuggets were produced.

Lucky for consumers, health agencies stays on top of issues like these and Tyson has acted quickly. So with this new recall issued, parents, be sure to check your freezers for any sacks of the affected ready-to-eat chicken strips.

More Like This
Can The Baby Have That?
The FDA Is Warning Parents To Not Use Baby Neck Floats After One Infant Died
6 Takeaways From The White House’s First-Ever Parents Press Conference
5-Year-Old Boy Died In Hot Car As His Family Prepared For Sister's Birthday Party