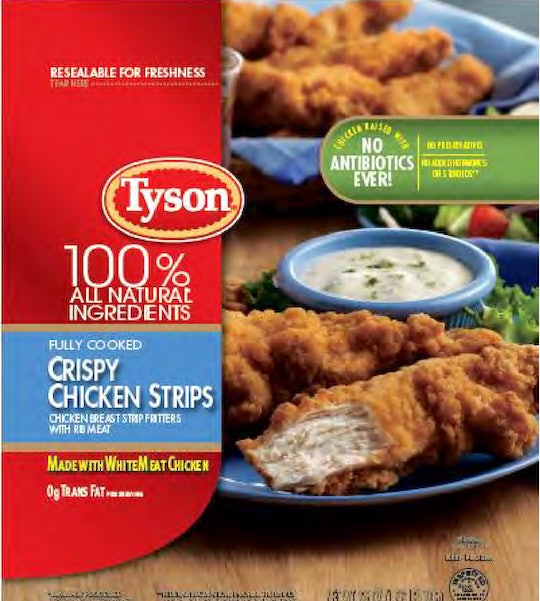 Attention, parents: It's time to head to you freezer and check if any of your chicken is included in a massive recall. Like, pronto. That's because Tyson recalled millions of frozen chicken strips due to dangerous contamination, according to CNN.

On Friday, March 3, Tyson Foods seriously expanded a recall involving chicken strips, according to the United States Department of Agriculture's Food Safety and Inspection Service (FSID.) The recall — which was first initiated in March — now affects more than 11.8 million pounds of frozen, ready-to-eat chicken strips. This is up from the over 69,000 pounds initially.

As CNN reported, the FSIS first discovered the issue after receiving two consumer about extraneous material in its chicken strips. There have been a total of six reports of people finding pieces of metal in Tyson products — three of which also said they suffered a mouth injury. Which products are included in the recall, you ask? The list is actually pretty extensive. Affected products include:

It's worth noting that only specific batches of these products are included in the expanded recall. Here's what to look out for, according to the FSIS:

"Consumers expect that the food they eat is safe. In their best interest and in an abundance of caution we're taking quick and decisive action to expand this recall," Barbara Masters, Tyson Foods' vice president of regulatory food policy, food and agriculture said in a news release. "We have discontinued use of the specific equipment believed to be associated with the metal fragments, and we will be installing metal-detecting X-ray machinery to replace the plant's existing metal-detection system. We will also be using a third-party video auditing system for metal-detection verification." Masters continued:

Safety is at the core of everything we do. We're committed to producing safe, healthy food that our consumers and customers can rely on every day. It is unacceptable to Tyson Foods that any product might not meet our standards. Because of these additional consumer reports, we've decided to take this precautionary step to make sure that we're meeting our own expectations and the expectation of consumers.

If you happen to find any products affected by this recall in your freezer, the FSIS urges you to throw it away or return them; do not consume them. Anyone who is concerned about an injury or illness should contact a healthcare provider. For questions about this recall, contact Tyson Foods Consumer Relations at 1-866-886-8456.