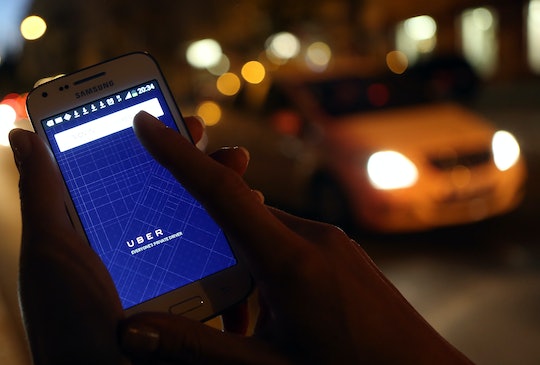 An Uber Driver Brought Her Kid To Work, & The Customer Awesomely Refused To Rat Her Out

OK, needing some help with this one, you guys. This story about a customer choosing to keep his driver's identity a secret after Uber driver brought her kid to work with her has left me slightly confused. Granted, my working mom lens might be fogging this one up a little bit, I can't tell if this recent trending Twitter exchange provides commentary about working parents in our modern society, or if it's merely a funny online interaction between a company and a customer. Like, does someone publicly having the back of a working mom mean that a line has been drawn, and allegiances have been claimed? Is he sticking it to a large corporation that might potentially try to discipline an someone who might just be a hard-working parent who, like so many hard-working parents, found herself in a situation where she needed to work but didn't have alternate childcare? Or are we looking too much into a quick, spur-of-the-moment joke that wasn't meant to serve a purpose beyond general amusement?

The answer is D: all of the above, especially the part about probably reading too much into all of it (guilty as charge). That said, If the comments on social media are any indication, the rest of Twitter is having a conundrum as well. There's a reason why, at the moment I'm writing this, there have been nearly 30,000 re-tweets and more than 43,000 likes on the post.

Here's the situation: back in September, Uber customer and Twitter user Tomas sent out a photo of himself in the backseat of a car with a cute kid:

OK, I can admit that this is kinda funny on its own. The parent in me is like, "Ehh, he posted a pic of the little one... I wonder if mom knows and is cool with that?" but I'll try to turn off my overly sensitive mom sensors. I will also say that I think only a dude (and I'm assuming a childless one) would look at this situation and think it was hilarious. I feel like if a fellow mom had gotten in that Uber, she would've spent the entire ride commiserating with the driver over the very real struggle of making sure your kids are covered while you're working. Anyway, moving on...

Ah, yes. Here we see that Uber was all over this. Their customer service account replied within minutes of the original tweet going out. And, here's the kicker:

Uber's driver recruiting page doesn't say anything about not driving with your kids, so it's hard to know what sort of ramifications the driver would face, if any. Romper has reached out to Uber for comment on this story, and has yet to hear back. Still, Tomas chose to keep his driver's identity a secret, just in case, which is a win for humanity. Most of the Twitter replies, which have exploded since early January 2016, are super positive (with a few exception because, well, it is the Internet). That said, I'd call that a happy ending:

Being a working mom is hard, guys, so it's really nice when we can encounter random strangers who will not only laugh with us, but have our backs.