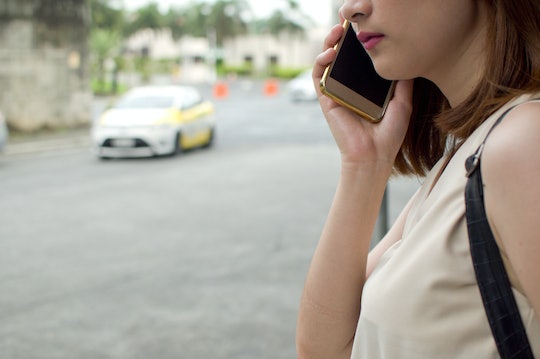 If You're Pregnant, You Might Want To Add Uber Health To Your Shortcuts

One of the biggest barriers to accessing health care in the United States is cost. Another barrier is transportation. Millions of people, especially from low-income households, have a difficult time getting to their doctor's office for a necessary medical appointment because they lack access to a car or public transportation. To chip away at the problem, Uber has launched Uber Health, a new service that connects patients to their health care providers. And it seems Uber Health could be a game-changer for pregnant women and mothers who may have a hard time accessing prenatal and perinatal services.

This is how Uber Health is set up to work: the service, which launched Thursday, will partner with hospitals, clinics, doctor's offices, and other facilities that would able to schedule rides for their clients using a special HIPPA-compliant digital dashboard, according to CNN. Through the digital platform, health-care providers can use text message or print out a piece of paper to alert their patients to their rides, the cost of which providers will cover. Since the focus of Uber Health is to expand access to medical care, the company implemented the paper option so that people without smartphones can also use the service, CNN reported.

Uber launched Uber Health in response to one alarming statistic: About 3.6 million people, including 950,000 children, miss or delay medical care because of inadequate access to reliable transportation, according to the Community Transportation Association. In addition, nearly a third of patients fail to make doctor's appointments every year in total, TechCrunch reported. And those missed appointments have a very real financial impact on the medical system: $700 per each missed appointment, or $150 billion total annually, according to The Harvard Business Review.

Uber’s endeavors into health care trace back to 2014, when Uber first offered on-demand flu shots in large markets across the U.S. Since then there have been similar efforts throughout the world, from diabetes and thyroid testing in India, to subsidized rides for breast cancer screening in the U.S., to many more. That said, all of these efforts have been pop-ups.

It's important to note, though, that Uber Health is not a replacement for emergency services and vehicles including ambulances, as TechCrunch noted. In the past, and to this day, people have used Uber for urgent medical care because the drivers tend to arrive quicker than ambulances do, according to a Buzzfeed report published last month. A study Buzzfeed cited even found that, when Uber enters new markets, ambulance rides nosedive. But relying on any ride-hailing platform puts the driver at liability risk should anything go wrong during the ride, and can also put the health of the sick passenger at risk in that case too, according to Buzzfeed.

Nonetheless, Uber Health can still do a lot of good for millions of people across the country, even if it's not meant to be used as an emergency service. Pregnant women and new mothers who don't have access to reliable transportation, especially those who live in rural settings, may no longer have to worry about how they'll receive care for them and their little ones because Uber Health could fill that gap. Will Uber Health be without issues? Probably not. But this is at least a start.

More Like This
Are You Leaking Amniotic Fluid Or Is It Normal Discharge? Experts Explain
What Does Amniotic Fluid Smell Like? A Nurse Explains
Louisiana Candidate Katie Darling On Giving Birth In Her Viral Campaign Ad
Kids With Head Lice Don't Need To Miss School, AAP Stresses In Updated Guidelines