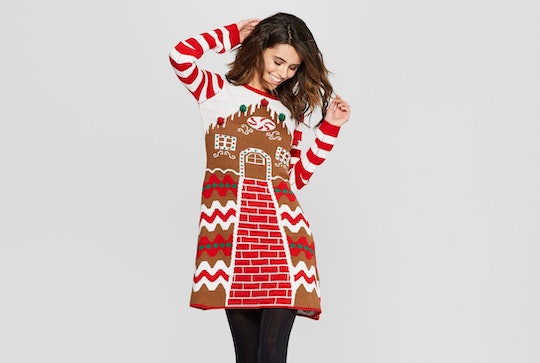 From blinking sweaters to this year's controversial all-red White House trees, people are pretty used to the notion of pretty-ugly holiday style by now; that look where it might just be a tad too much sparkle, or excessive green or red... but you still kind of like it. Well, add another item to that genre: Ugly holiday sweater dresses are here for all of your holiday party needs.

The "Ugly" frocks, made by Target partners 33 Degrees and Born Famous, range in size from small to extra-large in women's or extra small to XXL in junior's.

The only problem I can see here? These dresses are so not ugly! In fact, I am considering my first "ugly" x-mas ever! And with some of these $33 to $40 dresses on sale right now? Well, the Target cart said an "ugly" holiday look can be mine by this afternoon at my local branch for only $21.67.

At that kind of price, even if you only wore it once or twice, but had some jolly good fun while doing so, it's still totally worth it.

Some of the cutest touches here are the pretty-ugly details: A shiny "elf" collar, a gold belt, and actual tulle on elf-themed frock, for example. The "Ugly" Santa dress features a sequined faux black belt on a fake-fur-trimmed mini with a sprig of holly accessorizing the top of the dress (I mean, come on).

The green, red, and white-striped belt on the Christmas Snowman number allows you to cinch the look for an accentuated silhouette, and maybe untie it after all that plum pudding.

Meanwhile, the Candy Cane Striped Dress is made of a sweater material and features a pattern of string lights on the front, which is topped off by an actual bow and working pocket.

Then there's the super-cute Ugly Hanukkah dress. I mean, did you even know "ugly" wardrobe items existed to celebrate the Festival of Lights? I didn't... but I just might have to get this one, which boasts a menorah, dreidel, and snowflake accents.

Although overly-decorated holiday sweaters and clothing have been around forever, and many people probably remember an elderly relative who always seemed to have an entire collection of very sparkly or tacky clothing come December, Time magazine noted the wearing "Ugly" holiday clothing didn't become a thing until after the year 2000, following a brief *moment* in the '80s.

The magazine added that Christmas sweaters are known to have been around since at least the 19th century, interestingly enough, although the "hipster" angle, of course, didn't occur until much later.

The classic movie Bridget Jones' Diary included a memorable scene in which two of the main characters dressed in terrible holiday sweaters, Time reminded me. Nowadays, there's an ugly Christmas sweater tag on Instagram, which includes sweaters for furry friends, too.

Ugly items now seem necessary just to fit in over the holidays, particularly with the rise of dedicated ugly Christmas sweater parties. Either go big with the whole trend, I say, or just add a red scarf to your black cocktail dress and call it a holi-day.