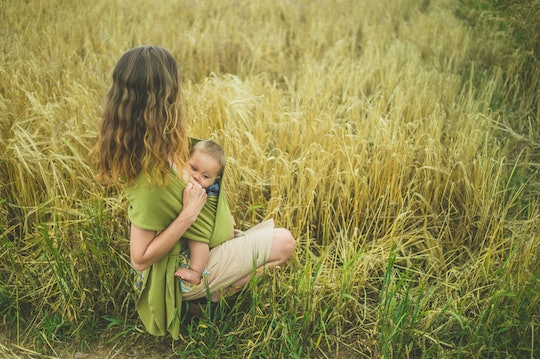 Um, “Strawberry Milk” Is a Thing & Every Breastfeeding Mom Should Know About It

After my oldest son was born, I power pumped at least once a day to boost my supply. During one early-morning pumping session, I noticed that my breast milk was pink, then red. It was horrifying. So, I did what any sleep-deprived mom would do: I screamed. I was convinced I was dying, so I took my pumped milk and baby straight to the doctor. It turns out some breastfeeding moms produce “strawberry milk.” For the most part it's not a big deal, but there's definitely nothing strawberry-flavored about it.

According to Medela, breast milk is not always creamy white. Breast milk can turn different colors, for a variety of reasons, mostly related to what you eat. In other words, what you digest can literally change the color of your milk red, pink, green, orange, or even brown. Weird. In my case, though, my red breast milk was actually blood. Yes, actual blood in the actual milk I was actually feeding my baby, you guys. As pediatric nurse Donna Murray, RN, BSN, writes for Very Well Family, blood in your breast milk can actually be caused by a variety of conditions. The more you know, right?

While red breast milk might totally (and understandably) freak you out, according to the Infant Risk Center at Texas Tech University Health Sciences Center, milk that's red while you are pumping is generally not a big deal. But milk that turns red after you pump might be contaminated with a potentially harmful bacteria. So, if you have red or pink milk, you should see a doctor to rule out a problem before giving that milk to your baby.

The U.S. Institute of Medicine Committee on Nutritional Status During Pregnancy and Lactation reports that breast milk composition is largely dependent on what you eat. That's why it's so important that you consume enough of the right nutrients while breastfeeding or pumping. What you eat can also change how your breast milk looks. According to Medela, eating orange foods might color your milk yellow, eating greens might make your milk green, and eating beets or foods with red dye might make your breast milk look strawberry flavored (it's not, by the way). Our bodies are amazing and, well, more than a little gross.

As Pediatric Nurse Donna Murray, RN, BSN writes for Very Well Family, red or rust-colored breast milk might be small amounts of blood that end up in your breast milk. This can be caused by a variety of conditions, including one that is actually nicknamed rusty pipe syndrome, which just sounds wrong when you are talking about a person's body and not faulty plumbing. According to Murray, this harmless condition is caused by blood left in your ducts after breast changes during pregnancy. It should go away a few days after you gave birth, though, and if it doesn't you should definitely go to the doctor.

Another potential cause of red or pink milk — I sadly discovered — is bleeding nipples. According to BabyCenter, cracked, thrush, bacterial infections, and latch problems can cause your nipples to bleed while pumping or breastfeeding. Murray adds that blood in breast milk can also be caused by broken blood vessels (from pumping incorrectly), mastitis, or even breast cancer. She adds that you don't have to stop breastfeeding when there's blood in your milk, but you should definitely consult a health care professional, especially if the problem is not visible or is causing breast pain — like cracked, bleeding nipples. Shudders.

But, before you dismiss your red milk as no big deal, you should know that that's not always the case. According to a case study published in the Journal of the Pediatric Infectious Diseases Society, pink or red milk might be a sign that your pumped breast milk is contaminated with a potentially dangerous bacteria called Serratia marcescens. This bacteria is actually really common, and is the same bacteria that causes pink stains on toilets and bath tubs. Ewww.

The Infant Risk Center at Texas Tech University Health Sciences Center says there's an easy way to prevent bacteria from growing in pumped milk. They advise pumping parents to be sure to refrigerate their breast milk and to wash their pump parts as soon as they are done pumping, as this will stop the bacteria from growing and potentially infecting your baby. The same site also recommends that anyone who notices their pumped milk turning red or pink after they pump consult a doctor before they feed it to their babies.

It turns out that many things can cause your breast milk to turn red or pink. It's not likely a huge deal, but it's always a good idea have your doctor weigh in, especially when your baby is concerned or if you're experiencing other symptoms like pain or bleeding.

More Like This
Breastfeeding In Front Of Family Members Doesn’t Have To Be Stressful
What Parents Need To Know About Sleep Training & Breastfeeding
Why Does My Baby Cough While Breastfeeding? Experts Explain
Is It Safe To Pump While Pregnant? Experts Weigh In