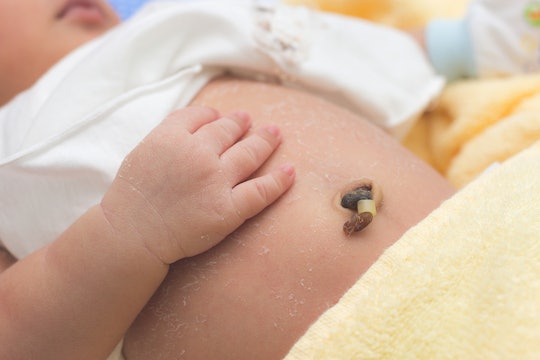 Umbilical Cord Jewelry Is The Trend You Need To See

Look, I thought I was up on all the parenting and baby news, from the latest stroller to the fact that sucking on baby's pacifier may help avoid allergies later. I thought I had this. But it turns out, I had a missed a whole thing — and yes, umbilical cord jewelry is the parenting trend that you need to see.

The new concept is actually pretty simple, and just a new take on an old idea. You already knew, for example, that cord blood can be banked for later, according to the American College of Obstetricians and Gynecologists, on the premise that its stem cells may help fight diseases for either your baby or a sibling. And many moms have been using the placenta in post-birth smoothies or by having it ground into pills.

Chrissy Teigen and Hillary Duff have followed the trend, according to USA Today, although WebMD notes there isn't currently any proof that this practice, though common among animals, is beneficial in humans So surely, keeping the umbilical cord and turning it into a bauble isn't all that strange, right? Because these pieces are seriously beautiful.

Jeweler Nianna Rodriguez told USA Today that the process makes perfect sense, since besides creating a wearable memory for sentimental moms, the stump of the umbilical cord can be turned into that perfect accessory (who knew?).

"It's amazing how you shave off the top layer and that's where you get this beautiful amber color that translates wonderfully into jewelry," she said. Designers such as Rodriguez allow interested moms to pick a design and then just follow the packing instructions for sending the stump off in the mail to her.

Custom jewelry designer Ruth Avra has been making pieces involving the umbilical cord since her son was born in 2012, according to Self.

Since then, the new art form has become a specialty of the artist, who was trained in metalsmithing, and she can make a ring, bracelet, or cufflinks using the cord stump.

She can also make a bracelet in which the stump and the baby's birthstone are both incorporated, her Instagram shows, and her website includes something I've long since pondered what to do with — using baby's hospital ID tag to make a bracelet.

USA Today reported that Avra's bestseller is the silver umbilical cord necklace, which sells for $195. People order them from all over the world. "These are really organic pieces — no two are anywhere alike," Avra told Self.

For her part, Rodriguez told Self that the stump, the remainder of the all-important cord that gave a baby nutrients and oxygen in utero, is a very personal reminder of the journey of pregnancy, a "personal keepsake to remember that season of life of having little kids and barely having the time to shower."

She also noted the fact that many moms who have endured a challenging pregnancy or a stillborn birth are looking for something tangible to hold onto in their recovery process.

And with this trend having also hit England and now being its own entire category on Etsy, this is likely only the beginning. Hey, this is one necklace you won't ever be worried about spying on other women walking down the street.