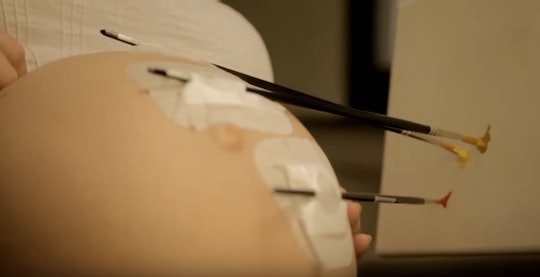 In what may be a world first, there are now unborn babies in Belgium (and, quite possibly, all over the world, if they’ve successfully sold any of the DIY kits) who are creating and selling their own art. Yes, you read that right: These babies haven’t even been born yet, but pregnant women are attaching paintbrushes to their bellies and allowing their baby’s kicks to create “art,” which they are then putting up for auction.

Now, in all honesty, I laughed a little when I read about this. I mean, come on! It’s a bit silly, isn’t it? But watching the video and understanding why they’re doing this — to raise money for unborn children in Africa in an effort to help boost survival rates — made me think twice about laughing.

It’s a serious matter, one that does need a light shined on it. Access to sufficient medical care for pregnant women in many African countries is sorely needed. According to the World Health Organization, the infant mortality rate remains startlingly high, at 61 per 1000 live births in Africa, in 31 countries. It is indeed a number that’s unacceptable, and I commend these women for drawing our eyes to the problem, and helping to raise money to change it.

So if a slightly sensationalist take on raising money for a charity like SOS Children’s Villages is what it takes, I guess I can get behind that. Because, let’s be real here: Beyond just making money from the ~art sales~, a story involving unborn babies making art is surprising enough that it’s going to get some serious press.