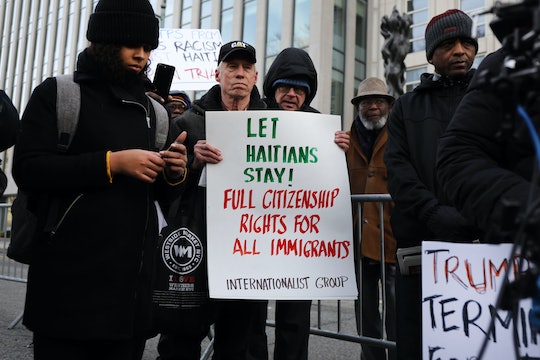 Throughout his 2016 presidential campaign and time in the Oval Office, President Donald Trump repeatedly claimed that undocumented immigrants pose a danger to the United States. A major pillar in his policy platform centered on stopping undocumented immigrants from coming into the country, which he's previously falsely generalized as "criminals" and "rapists." Now, as The New York Times reported, a new study on undocumented immigrants and crimes is debunking some of Trump’s most harmful rhetoric.

A new analysis from The Marshall Project based on findings from the Federal Bureau of Investigation (FBI) and Pew Research Center suggest that there is no link between crime rates and populations of undocumented immigrants. The Marshall Project compared estimates of undocumented immigrants sorted by metro area from the Pew Research center with data from the FBI on crime rates in those localities. According to the findings, as The New York Times reported, there's "no evidence" that shows a correlation between crime rates and undocumented populations.

Between 2007 and 2016, violent and property crimes decreased slightly in most areas. These numbers, which were consistent with a quarter-century decline in crime in the United States, were unaffected whether or not the undocumented population increased or decreased. In fact, areas with more undocumented immigrants actually seemed to have larger decreases in crime, although the variation was small and uncertain, according to The New York Times.

Similar findings suggesting that undocumented populations are linked with lower crime rates have surfaced in the past. Last year, a report by the Cato Institute suggested that unauthorized immigrants in Texas committed fewer crimes than Americans born on U.S. soil. “The vast majority of research finds that immigrants do not increase local crime rates and that they are less likely to cause crime and less likely to be incarcerated than their native-born peers,” the research stated.

Another study from 1990 to 2014 that was published last year in Criminology suggests that the relationship between unauthorized populations and violent crime is generally negative, and that undocumented immigration did not increase violent crime, but was rather linked to slight decreases in it.

And in 2017, an analysis conducted by Governing suggested that not only is there no positive link between undocumented immigrants and violent crime, but that concentrated areas of unauthorized immigrants were correlated to lower violent crime rates. A similar link was true for property crime rates, according to the same analysis. Average property crime rates dropped 94 incidents per 100,000 residents for every one-percentage point increase in the unauthorized immigrant portion of a metro area’s population, the Governing analysis found.

These findings are directly opposed to President Trump’s claims in the past, which have suggested that unauthorized immigrants are to blame for crime rates in the U.S. “[Mexican illegal immigrants] are bringing drugs. They’re bringing crime. They’re rapists,” Trump said when he launched his campaign in 2015, according to USA Today.

This rhetoric turned into policy with Trump’s push for a wall at the U.S.-Mexico border and his ramped up efforts to deport undocumented immigrants. In fact, recent ICE data from 2018 shows that immigration arrests and deportations are on the rise, and that new policy resulting from Trump's executive order led to an increase of indiscriminate arrests. The federal agency said it arrested about 159,000 undocumented immigrants during the 2018 fiscal year, which marked an 11 percent increase since the previous year.

Now, study after study is showing that the premise of these deportations and anti-immigrant policies are, to put it simply, not rooted in the facts.