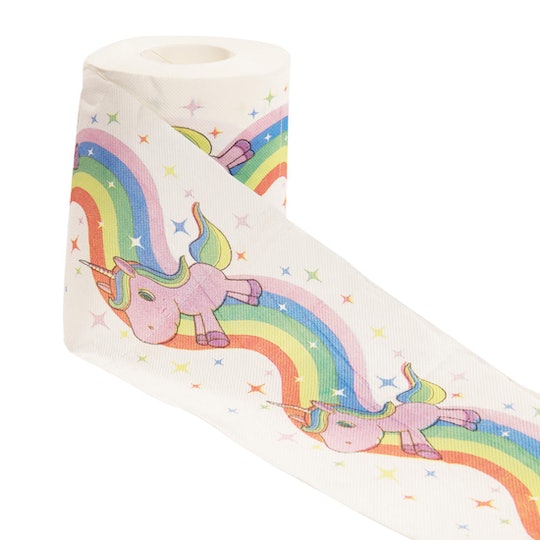 You Need This Cute AF Unicorn Toilet Paper In Your Bathroom

You didn't think the unicorn trend was going anywhere anytime soon, did you? Because it's definitely, definitely not. And if all the unicorn-themed food, makeup, and even pool floats aren't proof enough for you, then this definitely should be: Unicorn toilet paper is now a thing that you can buy and use in your very own bathroom, and quite frankly, you're probably never going to want to use regular toilet paper again. So how do you get your hands on a roll (or a lifetime supply)?

Unfortunately, you can't stock up on this whimsical bathroom staple at your local grocery store, where it would no doubt sell out the second it hit the shelves anyway. The toilet paper, which features pink cartoon unicorns prancing over a seemingly endless stream of rainbows, is only available through the European tech site Get Digital. But don't stress: They ship to the United States, so you too can "bring friendship and magic into your bathroom," as the site promises. (And who doesn't want more friendship and magic in their bathroom?)

One thing's for sure: This toilet paper will definitely bring unicorns into your bathroom, and these are some seriously cute unicorns:

Awww, they're so happy! Yes, that is the cutest toilet paper you've ever seen. And, OMG, even the box it comes in is adorable:

If this stuff won't brighten up your bathroom, nothing will. It makes the plain white rolls seem like a wasted creative opportunity! How can anyone use this toilet paper and not get an instant mood boost? Honestly, though, the description on the Get Digital site is enough to make me want to buy it:

The faction within our company known as the Unicornnati is trying to bring the cuddly mythical creature into every last aspect of our everyday lives. Doormats and shower curtains were just the beginning... Now they're trying to conquer every man's fortress of solitude[:] the toilet. Yes, you read that correctly! They're coming for our toilets... Well, to be more precise, they're coming for our toilet paper.

The Unicornnati, eh? Hey, you never know. But, seriously, as the site explains, this paper is apparently a quality product (and novelty items often are not great quality, which is something you probably know if you've ever shopped at a store with "party" in the name). Each roll contains 200 sheets, which are printed with food-grade coloring, and are supposedly as soft as the "fur of a unicorn." Granted, no one knows exactly how soft a unicorn's fur would be, since unicorns aren't really a thing (sorry!), but one would imagine the mythical creatures as fairly fluffy.

Plus, just think of how much more fun potty training would be with this toilet paper as a motivating factor for your toddler! With my older kids, I had to resort to the promise of princess and/or superhero underpants as a promise for progress made, but with my youngest (currently in the process of ditching diapers), I might just have to pick up a roll or two of unicorn roll to pique his interest in using the big boy toilet.

Of course, there's also massive gift potential with this product, which would make a ridiculously fun birthday present or Easter basket addition (yes, I just suggested putting toilet paper in your kid's Easter basket). And, come to think of it, why not think outside the bathroom? You could use this toilet paper as party streamers, really. It's just that charming.

Whatever you decide to do with your unicorn toilet paper, you can buy it at Get Digital in either one or three packs for £3,95 or approximately $5 a roll.