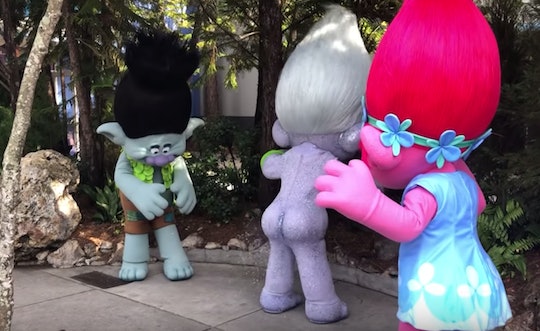 If your kids are anything like mine, then you've probably seen DreamWorks' 2016 hit movie, Trolls, roughly 500 times by now. Oh, and don't even get me started on the TV special, Trolls Holiday, or the Netflix series, Trolls: The Beat Goes On! Yep, we've seen it all in this house. So I can just imagine how excited my kiddos would be if they got to meet some of their favorite troll characters in person. Well apparently, Universal Studios has a glitter-farting Guy Diamond from Trolls. And honestly, kids are going to be obsessed.

According to Attractions Magazine, Poppy and Branch have been doing meet and greets with guests for a while now at Universal Studios Florida. However, the park recently added another beloved troll to the line-up: Everyone's favorite auto-tuned, bare-bottomed, glitter-tastic troll, Guy Diamond. And get this: He literally farts glitter! Ahead of the meet and greet event, the troll trio dances for guests — culminating with a poof of glitter from Guy's naked behind, Inside the Magic reported. A video of the dance, which was shared by the magazine's YouTube and Twitter accounts, has managed to attract a fair amount of attention. Check it out for yourself!

Um, yes! But where, exactly, can guests find Guy Diamond? Attractions Magazine reported that if you want to check Guy Diamond out for yourself, live and in person, you first need to head to Universal Studios Florida. Then, make your way to Woody Woodpecker's KidZone in order to find him. Currently, Guy Diamond's only participating in weekend meet-and-greets and only in Florida. There's no word yet if he'll end up in California as well, but it's likely a good bet.

Based on Twitter reactions, the concept of a troll that farts glitter is highly polarizing. Some were skeptical — or downright disturbed — by the addition of Guy Diamond. One person wrote, "I’m very uncomfortable with how sculpted his butt is."

Yet another person declared, "This must be the worst job at universal," to which Universal Orlando Resort replied, "I would find it quite... liberating, actually." LOL.

Still, plenty of people were all for glitter-farting Guy Diamond. One Twitter user wrote, "I gotta meet him just to see this! I kind of hope he farts on me lol. I know. I’m weird."

Another person chimed in with, "Everybody is losing their minds over Guy Diamond and his glitter farts at @UniversalORL. And I’m over here like: when do I have free time in my schedule to meet him? To hug and cherish his sparklyness? #GlitterFarts."

Yet another Twitter user wrote, "I’m going to spend $100 go straight to the trolls watch this and leave it’s worth it."

Oh, and apparently Guy Diamond's big moment is already a GIF. Just in case you were wondering, (You're welcome.)

Honestly, all of this troll talk has me pretty pumped about the Trolls 2 April, 2020 release. Yes, I realize it doesn't hit theaters for more than a year. (Shhh. Don't spoil my fun.) In the meantime, I wouldn't be surprised if watching Guy Diamond do his sparkly-fart gig winds up being the highlight of many upcoming Universal Studios Florida vacations. Aside from finally visiting the Wizarding World of Harry Potter, I know it would be for me.