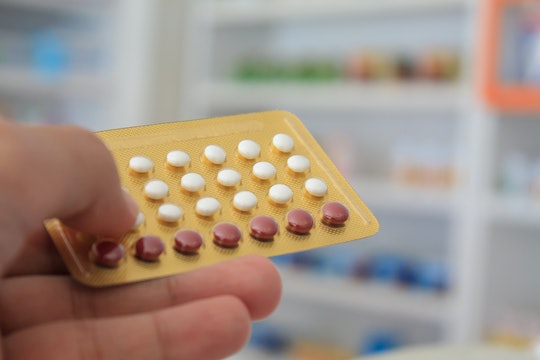 Universities No Longer Have To Cover Birth Control, & It Means Higher Costs For So Many Students

Despite the near-constant bragging about his accomplishments, President Donald Trump has managed to get very little done in his nine months in office. But he's started to fulfill one campaign promise — to "protect religious freedom" — at the expense of women's rights: many employers and universities no longer have to cover birth control, because to the Trump administration, imposing your religious beliefs on others is more important that the health and well-being of (female or gender non-conforming) students and employees. The rule change became effective in early October, and it took less than a month for the first university, Notre Dame, to take advantage of it.

The faculty, staff, and graduate students of the University of Notre Dame were notified by email last Friday that they'll no longer be eligible for no-cost contraceptive coverage beginning in the 2018 plan year. Coverage was previously available through a federally-funded third party, because the Catholic school objected to the Affordable Care Act's birth control mandate. Notre Dame's plan will allow contraceptive coverage "for treating a specific medical condition and not as a means of preventing pregnancy," according to the letter obtained by the South Bend Tribune, but apparently it doesn't recognize pregnancy as a medical condition.

Not only will this give university officials — who are not medical professionals and do not meet with each student's doctor — power over students' medical decisions, but it takes away birth control from a group that arguably needs it the most: people in college, who are already paying for tuition (many of them with exorbitant loans).

The roll-back of the birth control mandate came in three simultaneous parts: on Oct. 6, the Trump administration issued two rules; one broadening employers' abilities to claim an exemption for religious beliefs, and another introducing exemptions for moral objections. The ACA birth control mandate took effect in 2012, and, according to Politico, women saved $1.4 billion on birth control pills in 2013 as a result. Approximately 55 million women have benefited from the rule, and now, hundreds of thousands may lose coverage, even those who aren't employed by religious organizations.

The third prong of the attack on birth control came from Attorney General Jeff Sessions, who issued legal guidance to all federal agencies that same day outlining the federal government's new approach to "religious liberty." "Except in the narrowest of circumstances," Sessions wrote, "no one should be forced to choose between living out his or her faith and complying with the law." Sessions also holds that "[t]he free exercise of religion includes the right to act or abstain from action in accordance with one's religious beliefs," and that existing laws apply not only to individuals, but schools, "corporations, companies, associations, firms, partnerships, societies, and joint stock companies." So, just about anyone.

Sessions further instructed that the government can't "second-guess the reasonableness of a religious belief," even those that aren't "central to, or mandated by, a particular religious organization or tradition." So regardless of what religion a corporation claims to adhere to, they can make up any "belief" they want, and it's protected. Well, not just any belief; they can't use the guidance to get away with racial discrimination. But if they want to discriminate against women or LGBTQ people by citing religious freedom, the government "may not be able to" intervene, Sessions allowed.

And make no mistake: withholding medical coverage only from women and gender non-conforming people who need birth control is discrimination, as the ACLU wrote in a legal complaint filed against the Department of Health and Human Services, the Department of Labor, and the Treasury the same day the new guidance was issued. Access to birth control is "directly tied to equal opportunities for women," the brief read, "allowing women to make decisions that affect their education, employment, family, and health." For a preview of what's to come, look no further than Chile, where birth control became suddenly unaffordable for a five-month period in early 2008, according to the Washington Post. This led to a 4 percent increase in births due to unplanned pregnancies, as well as an increase in fetal and infant deaths due to neglect or lack of prenatal care. The resulting children were also less likely to enroll in kindergarten, first, and second grade. A grim future, but, hey, at least we'll have our religious freedom.