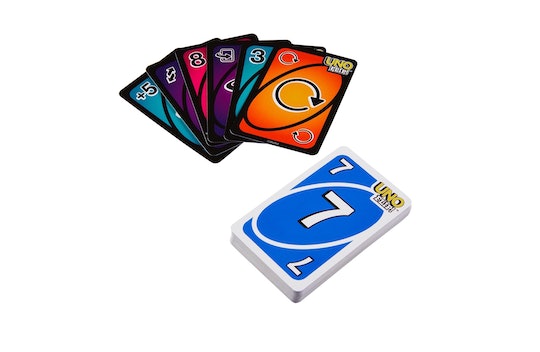 Growing up, my family was an UNO family. We never went on vacation without a deck of the cards in our suitcase, and bedtime wasn't a thing if we were deep in a family tournament. Some of my fondest childhood memories involved this game, and I've always looked forward to one day playing with my own children. Turns out, we might end up playing an even wilder game. UNO FLIP! is UNO's most competitive card game yet, and it's about to take your traditional UNO games to the next level.

If you're familiar with the classic UNO card game from Mattel, you know that rush of power that comes with wielding a "Draw 4" card (and, of course, the dread that comes with receiving one). In UNO FLIP!, brace yourself for "Draw 5" cards (gasp!) and other equally intense penalty moves. This new version is basically the classic game on steroids, and I'm here for it.

My friends and family give me a hard time for being a creature of habit, and my general motto in life is, If it ain't broke, don't fix it. Whether it's my favorite meal at a restaurant, a weekend routine, or yes, a card game, I'm stubborn about trying new things if the original works just fine. That said, I'm actually super excited to try this UNO variation, despite loving the OG version so much. It's got all the best parts of the standard UNO game, but with a dark twist.

Just like in a regular game of UNO, you'll deal all the players seven cards, putting the rest of the cards in a draw pile in the center of the table. However, unlike a normal UNO deck, each card has both a dark side and a light side. When the game begins, everyone plays with just the light side of the cards as if they're playing the classic. The light sides have all your standard UNO penalties, like "Skip", "Draw 2", "Draw 4", and Reverse.

Here's where the flip comes in: When a player plays a flip card, everyone flips their hands to the dark side. You continue playing the game using the dark sides of the cards, which come with much more severe penalties i.e. the previously mentioned "Draw 5 card", a "Skip Everyone" card, and a "Wild Draw Color" card that makes the following player draw cards until they get whatever color you choose. Depending on how lucky your hand is, the dark side is either going to be amazing or infuriating. Just like in traditional UNO, the first person to get rid of all their cards wins (just don't forget to say "UNO!" when you have one card left).

The best part about this new UNO upgrade is that it doesn't require anything extra. There are no extra cards, game pieces, or boards to carry around. Throw it in your purse or suitcase, and you've got hours of family fun in one little deck — or, if you're like my family, entire days of entertainment. We're UNO addicts — no shame.

Luckily, you won't have to wait for long to get your hands on UNO FLIP!. Major retailers nationwide will start selling the game come this March, and it'll retail for about $5.99 a deck.