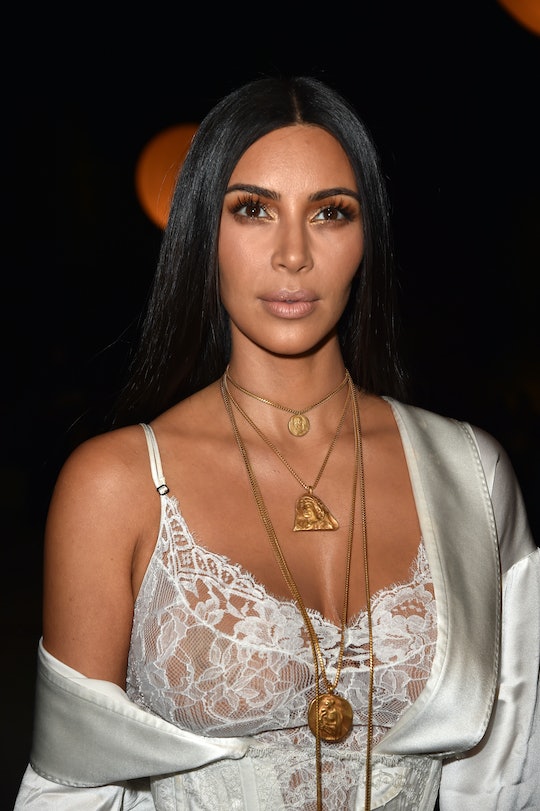 2016 wasn't the easiest year for Kim Kardashian. She was robbed at gunpoint in her Paris hotel room in October, and not long after, her husband Kayne West was hospitalized for exhaustion and an alleged breakdown. But updates in the Kim Kardashian robbery case might be a sign that 2017 is already looking up for the reality star: according to Yahoo! News, the Associated Press reports that French police arrested 16 people Monday in connection with the heist.

Kardashian was tied up and left in a bathroom by armed robbers dressed as police, who had entered her hotel room at around 2:30 a.m., after her bodyguard had left. According to The Guardian, five men could be seen on surveillance video entering the hotel, gaining access to Kardashian's room after threatening the doorman with a knife. In just over half an hour, the robbers left with more than $10 million in jewelry, including a ring given to her by West.

The suspects arrested in the case were reportedly already well known to detectives, and were apprehended in "coordinated early morning raids," around Paris, Normandy and the French Riviera, according to The Guardian. Two of them were allegedly identified from fingerprints left at the scene.

News of the arrests is likely to provide at least some reassurance to the reality star, who is said to have struggled with the psychological aftermath of the incident. While Kardashian stepped out of the spotlight following the robbery and remained pretty quiet on social media, an E! News promo for the upcoming season of Keeping Up With The Kardashians that aired Friday showed Kardashian opening up to her family about what had happened.

In the clip, Kim can be seen crying as she sits with her sisters, Khloe and Kourtney and recalled thinking during the robbery, "they're going to shoot me in the back. There's no way out."

According to E! News, a source revealed that Kardashian was understandably having a very difficult time recovering from the trauma of the incident, even though she has had a lot of support from loved ones, and has reportedly also received professional counseling:

Kim is doing better but she still has a long way to recover from the robbery ... Her friends and family have been really supportive. Her sisters and mom have been checking on her every day. Kim is very paranoid still when she is alone. She has been having flashbacks and hasn't been sleeping well.

According to The Daily Mail, the suspects range in age from about 50-years-old to 72-years-old, and "most have long criminal records." While only five of the men arrested are thought to have been directly involved with the robbery itself, police union spokesperson Luc Poignant told The New York Times that they were part of a greater network of criminals connected to the case. Poignant said,

You have the robbers, and then the one who is going to sell off the goods, the one who puts people in touch, the stone cutter, etc.

No charges have yet been laid in the case, and the suspects can be held for questioning by police for a maximum of 96 hours before they will need to either be charged or released. If charged, it is expected that Kardashian will be required to attempt to identify the suspects, according to The Daily Mail.

While it's not known exactly what the outcome of the arrests will be, Jean Veil, a lawyer representing Kardashian in France, told French media Monday that it was possible that the stolen jewels could be recovered and returned to her. Veil also said she hoped the arrests would finally end the "shameful speculation" that the robbery was somehow staged by Kardashian herself for publicity, according to The New York Times. Kardashian has yet to respond directly to news of the arrests.