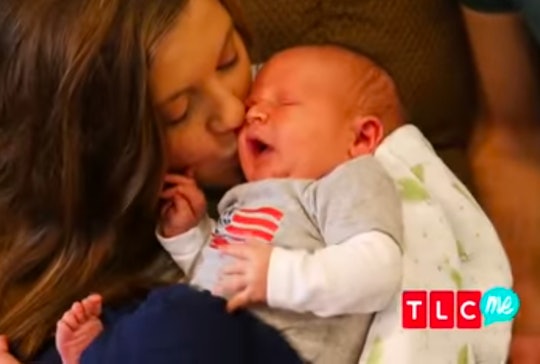 All Of The Adorable Updates On Joy-Anna Duggar's First Son, Gideon

The news is out that the Duggar family is growing — again. But don't look at Bob and Michelle. Joy-Anna Duggar and her husband Austin Forsyth just announced the impending arrival of baby number two, and fans of Counting On couldn't be happier. But what about their first born? Here are a few updates on Joy-Anna Duggar's first son, Gideon.

Joy-Anna and Austin were married in 2017 and it wasn't long after that they announced the arrival of their first baby, Gideon Martyn Forsyth, who was born on February 23, 2018 weighing in at 10 lbs., 3 oz., according to People.

While Mom and Dad were both ecstatic over the birth, the labor was not at all what they had planned, according to People. After 19 hours of hard labor, Joy-Anna's midwife discovered that baby Gideon was breached. This meant they had to forgo their home birth and head to the hospital for an emergency c-section.

Now, little Gideon is 15 months old and thriving. In honor of his first birthday, Joy-Anna and Austin created a video for fans, which can be seen on the TLC website.

"This year has been super easy," Joy-Anna said as Gideon looked at her wide eyed, eating a graham cracker. But that's the opposite of what Austin was going to say. "I was gonna say a lot of work!" Austin replied.

"We're finally getting some sleep now, but he keeps on going through different phases, teething and growth spurts," he continued.

As for his personality, mom says baby Gideon is very outgoing and since he's not super clingy to mom he'll go with just about anyone. And as fans can see from the dozens of Instagram photos of Gideon, he really does appear to be a character — one who always has a super big smile to share with the world.

Joy-Anna credits her knowledge of a baby's first year of life to her family, according to the Duggar Family Blog. With over 10 other brothers and sisters, you're bound to pick up a thing or two.

But his first year of life hasn't been without controversy. In February, Joy-Anna was called out by fans for going on a couples weekend with Austin to Branson, Missouri, according to Good House Keeping. The trip just happened to coincide with Gideon's first birthday. His parents arrived back into town on his actual birthday and celebrated as a family later that day. Unfortunately, fans thought they were choosing private time over baby time, for which sister Jessa Duggar happily jumped to their defense.

“All these people acting like you wouldn’t remember it’s the one-year anniversary of the most physically exhausting and simultaneously most joyous day of your life. Really??” Jessa wrote in response to Instagram comments. “Girl, I know y’all are heading back to celebrate Gideon’s bday, but seriously, even if you did stay away one more day it’s not like he’d know you were celebrating later."

It's kind of hard to stay out of the limelight when your mom and dad are reality television stars. Life will most likely be the same for Forsyth Baby No. 2. Thanks to Joy-Anna's love of social media, fans are sure to get a glimpse of the new baby as soon as he arrives. As for Gideon, it's only a few short months before he becomes a big brother, and Duggar fans can't wait to see how he does.