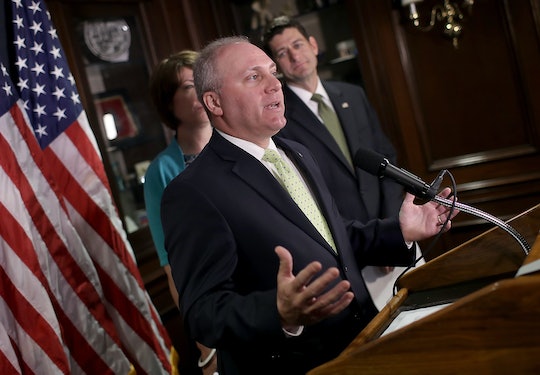 Steve Scalise, the Republican House Majority Whip who was shot during a congressional baseball practice session on Wednesday, is in worse shape than was initially reported. The Republican Louisiana representative suffered serious gunshot injuries and was reportedly in critical condition on Wednesday night after the shooting, which left another four people hurt. Updates on Scalise's condition are troubling, as his injuries are more complicated than previously believed and he's since undergone additional surgeries since his initial procedure.

According to the most recent report from MedStar Washington Hospital Center, the hospital where Scalise was being treated, initial surgeries did not solve the problems. The bullet entered Scalise's left hip, then traveled across his body. It shattered bones and pierced his internal organs, causing massive internal bleeding. Doctors performed surgery immediately after Scalise was admitted to the hospital, but it looks like additional procedures will be needed to repair the damage.

On Wednesday evening, President Donald Trump visited Scalise in the hospital with his wife, first lady Melania Trump, bringing bouquets of flowers and sitting by his bedside for 15 minutes. In Washington, the president commented on the congressman's condition and praised his strength:

It’s been much more difficult than people even thought at the time. He’s in some trouble. But he’s a great fighter and he’s going to be OK, we hope.

Earlier in the week, following his initial surgery on Wednesday, Scalise's office had issued a statement saying that Scalise had spoken with his wife and was, at the time, "in good spirits":

Prior to entering surgery, the Whip was in good spirits and spoke to his wife by phone. He is grateful for the brave actions of U.S. Capitol Police, first responders, and colleagues.

We ask that you keep the Whip and others harmed in this incident in your thoughts and prayers.

Two U.S. Capitol Police officers, later identified as Crystal Griner and David Bailey, were also wounded in Wednesday's attack. Capitol Police Chief Matthew Verderosa released a statement saying that Officer Griner was recovering well after getting shot in the ankle and Officer Bailey was treated for a minor injury and had since been released.

Tyson Foods lobbyist Matt Mika and Zack Barth, a staff member under Rep. Roger Williams, R-Texas, were the only others to be hit by the gunman's shots. According to a Tyson Foods spokesman, Mika was rushed to the hospital and was in critical condition following surgery. Barth was treated for his injuries and released.

Congressman Scalise was shot during an attack on the Republican team's practice in preparation for the annual congressional baseball game, wherein Republicans and Democrats compete to raise money for charity. The game will be played on Thursday, as scheduled.