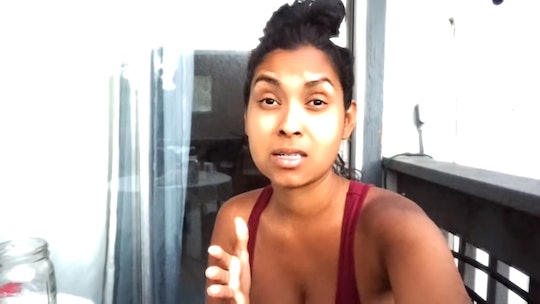 For more than two years, a "mostly fruitarian" vegan has been flying under the radar on YouTube, sharing hundreds of pro-breastfeeding videos under the handle "Spiritual Tasha Mama." But in early July, an old video began gaining traction, and since then, she's become the most polarizing internet personality since "Fit Mom." Here are all the updates on Tasha Maile you need to get up to speed with the controversy.

In September 2015, Maile uploaded a video describing how she breastfed her infant during sex. "We are pleasure beings, we are meant to enjoy sex and pleasure and all things can be orgasmic," Maile said, according to Us Weekly. "I remember sleeping with my ex-husband, and my son was on me breastfeeding, and we would have sex from behind or something." Earlier this month, Maile appeared on the UK talk show This Morning in an attempt to defend herself, saying that "many other parents have had sex in the same room that their children are sleeping in," but "even if the baby is awake and off to the side," it's still fine by her.

The backlash unsurprisingly grew, and Maile uploaded another video on July 15, titled "My Response to the Gentle Love Making While Breastfeeding Comments." As her 5-year-old son played with her hair and her toddler shouted off-screen, Maile addressed the camera, "Do I stand behind my experience, and am I having sex right now? No, but I definitely... I — I think that not everyone's gonna understand." She also said, "If you are unhappy, and ... telling other people how to live their life, it's because you're not living your own life! So get out and live!" She was then briefly interrupted by her younger son, nearly 3, who took a break from chasing a neighborhood cat in order to, well... if there's a more professional word for "motorboat," I'm afraid I don't know it. Maile concluded the video by warning that an alien race called "Greys" are actually "the human race in the future that have cut themselves off from love and sex."

Maile has continued to defend herself online, taking a number of different angles. A video posted to Instagram on Tuesday showed Maile breastfeeding her infant. It was captioned,

For all of the humans coming at me - ** let's talk about the real issue** telling me what they think of me. I have some truth for you, I love you. I love my children and what you think of me has nothing to do with me. Time to take response- ability for how YOU feel and why?? Why you might feel this way?? Why something SO innocent and SO beautiful could ever offend you? Take a child, does breastfeeding offend a child? Nope- not until it's learned. Hate is learned.

Meanwhile, critics have unearthed another controversial video from October 2015. "Implants & Breastfeeding My Toddler" features her oldest, then three, mugging for the camera as he nurses. They have a confusing exchange after he says "It's good to breastfeed and kiss!" His subsequent comments are hard to understand, but some viewers believed that he was describing an incident during which he and his mother pretended to be boyfriend and girlfriend.

On Monday, the UK's Mirror reported that multiple viewers had made negative comments on the video, calling Maile "very sick" and writing that she "has psychological issues and is looking for attention." As of Thursday, nearly all the new comments have been removed, save for one from Sunday that reads, "did youre son say that you pretended to be his girlfriend i need answers﻿." That phrase cannot be heard in the video, but Maile has yet to publicly address this latest controversy. It's important to note that toddlers say weird things all the time, and to outsiders those things might sound really strange. Maile didn't immediately respond to Romper's request for comment.

Maile's most recent video, "Women Can Do 'Wrong' Too," posted July 19, features another defense during which the vlogger states that she believes that "the more average or normal age of a child to stop breastfeeding" is 7 or 8, because "that's when their subconscious mind kicks in and the other part of their brain starts to work." She then played a series of voicemail messages she said were recorded by Charis Melina Brown, a self-professed "Oracle" who claims to have met mermaids. In the final recording, Brown shares a story many may find disturbing (trigger warning): it involves a friend of hers "soothing" her 6-month-old daughter by touching her genitals, which Brown says was "healthy," due to the child's age, but wouldn't be acceptable to do to a 12-year-old. Romper has reached out to Brown for comment.

The apparent goal was to illustrate that sexual parts and/or behaviors have different connotations at different ages, but if that's the case, the video misses the mark. It continued for more than 20 minutes, while Maile talked about going without makeup for the first time, following her heart, and finally, eating a wild plant that she's "not sure" is fennel. Her videos are a mix of out-of-the-ordinary and, for some, inappropriate and triggering, but it's clear that she stands by the way she lives.