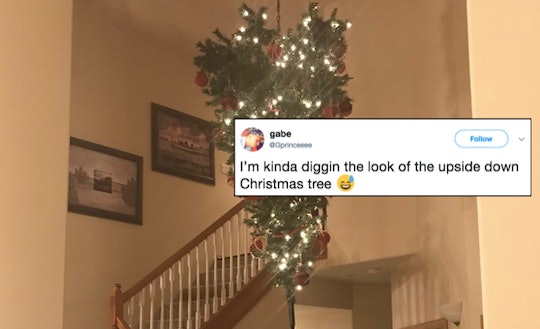 There has to be something new people can get mad about every holiday season, especially since the Starbucks cup scandals are starting to get a little old. This year, Twitter is freaking out about the upside down Christmas tree trend and, well, I sort of get it.

So, it turns out that people are hanging Christmas trees upside down from their ceilings. In large rooms, or places like a hotel lobby or shopping mall, it lends a super dramatic effect. In smaller homes, it just looks a little weird. Online, places like Target and Wayfair sell artificial trees made for hanging upside down and they range in price from $200 to just under $1,000. You can get them with lights already on it, or a white frosted one if you want to really make it look retro.

Hey, when it comes to Christmas decorations, everyone has a preference. Who's to say an upside down tree is any better or worse than a giant inflatable Santa Claus on your front lawn or blinking snowmen on the mantle? It's hard to judge other people's taste in holiday spirit, though that hasn't stopped Twitter from weighing in on the new decorating trend.

Not Everyone Is A Fan

But, Others Are Loving This Trend

Basically, It's A Love Or Hate Thing

Hanging trees upside down isn't a brand new thing. The traditions actually dates all the way back to the Middle Ages, according to The Spruce, when religious people would hang the tree upside down as a way to symbolize the holy trinity. In Central and Eastern Europe, it's still somewhat of a tradition.

A lot of department stores seemingly do it in the name of floor space and showing off as many ornaments as possible to customers at their eye level. So, like so many other holiday traditions, it's really about making sure people are buying things.

Earlier this month, Claridges, a department store in London, unveiled their Karl Lagerfield designed tree, which reignite the debate about whether an upside down tree is really "appropriate."

For some, the upside down Christmas tree is about more than aesthetics — it's a personal affront to their family values. Because of course it is. On Fox & Friends, the upside down Christmas tree was an entire segment and things got pretty heated — and weird. Corey Lewandowski, former campaign advisor for President Donald Trump and currently the spokesperson for the pro-Trump America First Action super PAC, said:

I mean, it’s everything that is wrong. Look: we have traditions in our country that many people respect, that we should respect, that we’ve passed on to our children. Look, a Christmas tree is one of those traditions. And if you don’t want to participate in Christmas or Hanukkah, whatever your holiday is, you don’t have to. But I don’t even know what an upside-down Christmas tree means.

Then he likened the upside down Christmas tree to basically everything bad in the world. And Seinfeld, though who knows what his problem with Seinfeld is. He added:

Conservatives get really upset when you mess with traditions or try to make the holiday season about something *more* than Santa Claus and Christianity. One of Trump's signature campaign promises in 2016 was that he would make sure everyone said "Merry Christmas" and not "Happy Holidays," even though millions of Americans don't celebrate Christmas and giving holiday greetings anyway is just a nice gesture of inclusivity. He repeated that sentiment at the Values Voter Summit in October, too.

It's safe to bet that the White House won't be putting up an upside-down tree this year, though it would be rather hilarious if Melania Trump decides she wants to be on trend. Fox & Friends would likely lose their minds.

But if you like the way it looks or just want to get the neighbors talking, it's not a bad idea. Just make sure you secure that thing.