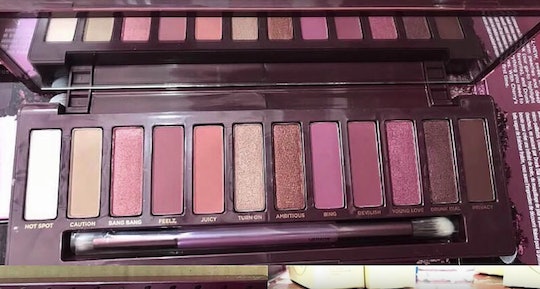 It's only been about a week since Urban Decay broke hearts around the world when the cosmetics company announced it would discontinue its iconic Naked eyeshadow palette (you mean I have to purchase Toasted and Dark Horse separately now? Horrors!), but TrendMood's Instagram account set social media aflame last night when it leaked that the Urban Decay Naked Cherry palette might be released soon. I know — basically hear to mend your broken heart.

By Wednesday morning, the post garnered over 80,000 likes in 19 hours, which can only mean that Urban Decay Naked fans are taking consolation in the introduction of a replacement palette. Featuring 12 shades of pinks, plums, burgundies, and more — with a taupe or two thrown in for more functionality — makeup lovers will have a variety of matte, shimmer, and satin formulas in a juicy variety of shades that are sure to dry their tears.

While eyeshadow trends in 2018 have become bolder, with Instagram stars and runway models dabbing reds, oranges, and yellows onto their eyelids with abandon, the Cherry palette dips into the cooler side of the trend than Urban Decay's warmer Naked Heat Palette. This falls right in line with makeup artist Patrick Ta's prediction in Elle that these shades would be popular in 2018.

While Urban Decay has remained mum on details for Naked Cherry, YouTube vlogger Elle S took an internet deep-dive and found that retailers in Thailand are already posting photos of it, and it might be landing stateside sooner than we think.

Just from investigating posts of the box, she determined that the design and inclusion of a standard double-ended brush (not fair, my first-gen OG Naked palette only had a single-end brush) meant the palette was probably legit. The description on the backside claims that the colors are all-new and include shades like Bang Bang (soft, micro-sparkle pink) and Ambitious (deep, metallic copper) for daily and evening wear.

Elle S seems pretty confident that since the palette in is the hands of some foreign retailers, U.S. consumers won't have to wait long to snag the juicy-hued tray. Revelist also did some digging and found that Urban Decay filed a trademark registered as "Naked Urban Decay Cherry" in February of this year.

So based off Instagram and Twitter photos, what's Elle S's evaluation of Urban Decay's Naked Cherry? "While it's very fresh in terms of the pinky tones, it's not terribly unique," she said in her video. "Overall, I think this is a beautiful assortment of eyeshadows ... I will say this feels a couple years too late."

Citing a similarity to Lime Crime's Venus palette, she continued to say that since Urban Decay unceremoniously axed the original Naked palette, she and other makeup lovers had hoped the company would introduce a groundbreaking product. "I had really wanted a Naked Forest palette for a long time with a beautiful assortment of green tones."

However, Elle S is effusive in her praise of the palette's shades, textures and versatility — again, based on her internet investigation and knowledge of Urban Decay products. "Overall, I think this is a beautiful assortment of eyeshadows," she said. "It looks like a really good mix between mattes and metallic shades. It does seem like it would allow you to do what it says on the box, so you can have those soft, subtle, angelic eye looks and then you can go much deeper and more intense and smokier."

She speculated that U.S. consumers might see the palette arrive stateside as soon as October, and since Urban Decay just announced yesterday that it will introduce its Elements Eyeshadow Palette — with 18 all-new shades — on Sept. 10 , perhaps a fall debut for Naked Cherries is right around the corner.