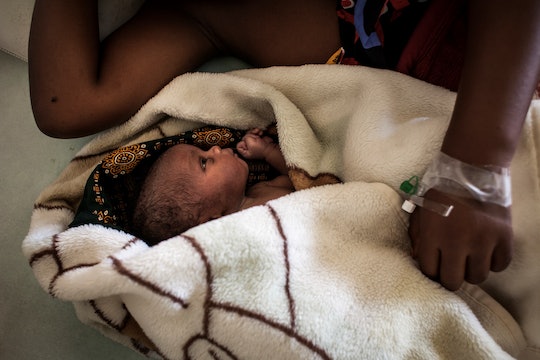 In the United States, about one-third of all babies delivered are by Cesarean section rather than vaginal birth. But research shows that perhaps that number is too high. So how many births are likely to legitimately require a C-section, and what are U.S. C-section rates compared to the rest of the world? Advanced medical technology could be driving those numbers higher.

According to research published in the Journal of American Medicine, C-sections are being over-used in the U.S. without any real benefit to mothers or babies. According to the Centers for Disease Control & Prevention, the U.S. Cesarean rate is 32.2 percent. That's compared, according to JAMA, the global rate of C-sections, which about 19 percent of deliveries. That's despite guidance from obstetrics healthcare providers at the World Health Organization that only about 15 percent of births medically require a C-section. This new research says 19 percent is an optimal rate of C-sections before a fall-off in overall benefit to maternal health.

That increase in C-section rates, according to the researchers, "could be linked to negative consequences such as severe maternal morbidity and mortality, neonatal intensive care unite admission, and consumption of health resources...."

There are several reasons for the rise in C-sections, namely, the research found, increased fetal monitoring in neonatal hospital units prior to giving birth, which can often trigger a C-section. For instance, if even the slightest irregularity is seen, it can be mistakenly interpreted as the baby being in distress, which is then treated with a C-section over instead of waiting for a vaginal birth to take it's course (and sort out an perceived issues).

"The increased level of fetal surveillance has led to increased rates of intra-partum cesarean delivery for presumed abnormalities in fetal status, but the use of electric monitoring has not been shown to improve the overall rate of perinatal mortality or cerebral palsy...," according to JAMA.

The odds of whether a woman will deliver by C-section has a lot to do with which hospital she goes to, according to the New York Times. Some hospitals have policies that trigger a C-section automatically if a baby is big. Hospitals with a "fee-for-service" billing model with doctors are also likely to have higher C-section rates.

"...the bulk of an obstetrician’s pay comes from performing the actual delivery, so doctors want to do their own," according to the New York Times. Meaning, doctors make more money when they are present to perform the C-section. This leads to a reluctance on the part of doctors and mothers to wait and see how delivery progresses. If a doctor opts to perform the C-section immediately, they can bill for the surgical procedure and be sure they will be the one to perform it, rather than an on-call physician who is available.

Other factors that are driving up Cesarean section rates in the U.S. include older, plus-sized moms having babies, more multiple births, more induced labor, and doctors no longer recommending vaginal breech births, according to TODAY.

So while the rate of C-sections climbs, doctors have warned that women and their babies aren't seeing any benefit. A C-section is a major surgery and poses all the risks associated with surgery, including infection and hemorrhaging, a bad reaction to anesthesia, an extended recovery time, and other potential injury, according to the Mayo Clinic.