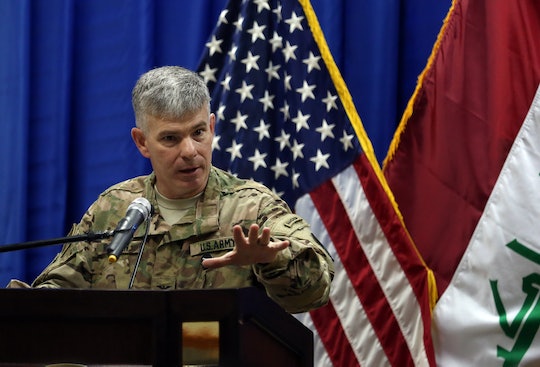 This month alone, 10 ISIS leaders, including al-Mouadan, have reportedly been killed in a series of airstrikes throughout the region. The death of al-Mouadan, a French national, comes the same day as reports emerged that Turkey has held a Brit and two Pakistanis believed to be members of ISIS. With Tuesday’s announcement, Col. Warren — also a spokesperson for Operation Inherent Resolve, an initiative against the terror group — pointed out that this was only the beginning of offensive strikes against ISIS:

Al-Mouadan was actively planning attacks against the west. We will hunt Isil [Isis] leaders working to inspire attacks against US and our allies. As long as Isil external attack planners are operating, the US military will hunt them and kill them.

According to the Sydney Morning Herald, the death of the 10 ISIS leaders has helped to neutralize the group. ISIS was also weakened over the weekend when the Iraq military reclaimed Ramadi, a region captured by Sunni militants 18 months ago. "Part of those successes is attributable to the fact that the organisation is losing its leadership," Col. Warren commented. Despite all the progress made, he cautioned: "It's still got fangs."

Abaaoud, who was linked to al-Mouadan, was killed on Nov. 17 following the Paris Attacks. The Moroccan-born 27-year-old was identified as the ringleader and also one of the gunmen involved in the tragedy and was behind four of six plots thwarted by French authorities since the spring, NBC News reports. A source told CNN that’s al-Moudan contacted the culprits days before the attacks. However, they said it’s unclear whether he contributed to the deadliest attack on France since World War II.

As previously mentioned, al-Mouadan wasn’t the only one killed in the Dec. 24 airstrike. With limited details on the deceased’s identities, Col. Warren said another person who died was a hacker for ISIS from Bangladesh but lived in Britain.

Following al-Mouadan’s death, Col. Warren also took to Twitter to reassure everyone that military forces will work together to continue to destabilize the group. “Al Mouadan was actively planning attacks against the west. We will hunt ISIL leaders working to inspire attacks against US and our allies,” Col. Warren tweeted on Tuesday.