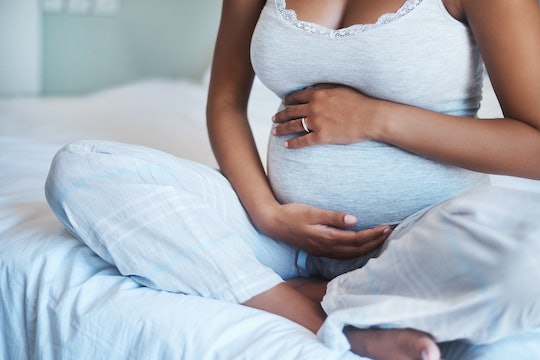 After more than 10 years without new data, a federal agency has finally updated the United States' official maternal mortality rate using figures from all 50 states. But while a new report has shown that the number of women who die each year due to maternal causes has remained relatively steady in recent years, not everyone's risk level is the same. In fact, the U.S. maternal mortality rate report shows black mothers' risk remains highest.

Data from all 50 states has shown that, in 2018, a total of 658 women died from causes related to or aggravated by pregnancy or its management either while pregnant or within 42 days of being pregnant, according to a report released Thursday by the Centers for Disease Control and Prevention's National Vital Statistics Reports (NVSS). Researchers say that number puts the United States' maternal mortality rate at 17.4 deaths per 100,000 live births.

This isn't the first time researchers studying maternal mortality have found racial disparities within the data, as reported by NPR, nor is it the first time that news outlets have reported on those disparities, per Fusion. And although researchers don't have a concrete answer for why these disparities exist, recent studies have suggested that structural racism and implicit bias within the health care system may be contributing factors.

But researchers also found disparities when breaking down the data by age, noting that as a woman's age increased, so to did her risk of maternal mortality. Women 40 and older, for example, were reported to have a maternal mortality rate of 81.9 deaths per 100,000 births. Compared to women 25 and younger, women at or over the age of 40 are 7.7 times more likely to die of maternal causes.

While the national maternal mortality rate released with Thursday's report was significantly higher than the 12.7 deaths per 100,000 births reported in 2007 — the last time data was collected — researchers think much of the increase can be attributed to changes in data collection methods. After suspending publication of maternal mortality rates in 2007 due to concerns about data quality, the government has moved to standardized data collection across all 50 states by adding a pregnancy checkbox to death certificates, according to US News & World Report.

It's worth noting, however, that 2018's official rate is only a slight jump from the rate of 17.2 deaths per 100,000 births pulled from data collected from 2011 to 2015 via the CDC's Pregnancy Mortality Surveillance System for a 2019 CDC study. But although the United States' maternal mortality rate appears to have stayed relatively steady in recent years, Vox has reported it remains one of the worst among similarly wealthy developed nations.