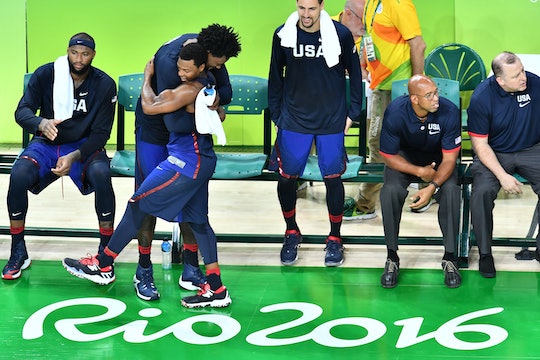 During the first quarter in Carioca Arena 1, Serbia was in the lead — but Kevin Durant quickly turned things around for the American team, bringing them to a 52-29 lead by halftime. (By the end of the game, Durant had racked up 30 points.) The team's gold came with a few more personal wins for its members: player Carmelo Anthony became the first men's player to win three gold medals and coach Mike Krzyzewski ended his run as an Olympic coach with nothing but wins under his belt.

According to USA Today, Anthony got emotional during an NBC interview after the game, saying, "I know this is the end. This is it for me." He added:

I’ve seen the worst, and I’ve seen the best. And I stuck with it. We stuck with it. And I’m here today, three gold medals later. I’m excited for me but also for the other guys who never experienced anything like this. ... Despite of everything that’s going on right now in our country, we gotta be united. I’m glad I did what I did, I stepped up to the challenge. This is what it’s about. Representing our country on the biggest stage that you can be on.

While the game may have become predictable by the time it hit halftime, fans were no less excited about the United States' win. Team members received shout-outs on Twitter, with fans praising Durant, Anthony, Kyle Lowry, and Paul George individually.

So what's next for the American team in Tokyo? Krzyzewski will take a step back into a special advisor role as San Antonio Spurs head coach Gregg Popovich takes the lead for 2020. With new teammates stepping in, the pressure will be on for the United States to continue their streak as defending champs, although Krzyzewski doesn't seem worried about handing off coaching responsibilities.

"Gregg Popovich is the ideal choice to take over as head coach of the USA program," he said in a statement in October. "He is considered among the very best coaches in the world."

No matter what happens in Tokyo, however, today the American men's basketball team added another gold to the United States' gold count — a nice addition as the Olympics wrap up on their final day.