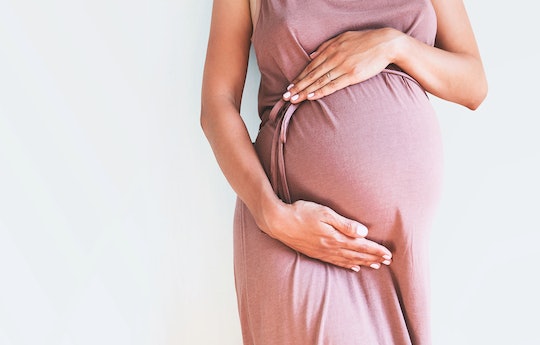 Ask anybody and they'll tell you that being pregnant isn't cheap. There's a lot of extra costs that go into pregnancy and health care is a big one. A new global study found that U.S. women pay more during pregnancy compared to other women in high-income countries. If you think that high price tag means better care, that doesn't seem to be the case. Although they pay more, U.S. women still face higher risks.

The report was published by the Commonwealth Fund on Dec. 19, 2018. It compared the health experiences of women in the U.S., Norway, Sweden, the UK, Germany, Switzerland, France, the Netherlands, Canada, Australia, and New Zealand.

Researchers looked at data from the Commonwealth Fund International Health Policy Survey and measures from the Organization for Economic Co-operation and UNICEF, as reported by CBS News. When it comes to other high-income nations, they found that the U.S. continues to lag behind in access to medical care, life expectancy, and overall health.

According to the Commonwealth Fund's website, not only do U.S. women report the least positive experiences (having a significant burden of chronic illness, difficulty affording their health care, least satisfaction with their health care, and high rates of skipping needed health care due to cost), but women in the U.S. have the highest rates of maternal mortality due to complications from pregnancy or childbirth.

Maternal mortality (or death) is defined by the World Health Organization as the "death of a woman while pregnant or within 42 days of termination of pregnancy, irrespective of the duration and site of the pregnancy, from any cause related to or aggravated by the pregnancy or its management but not from accidental or incidental causes."

In 2017, ProPublica reported that 700 to 900 women die from pregnancy or childbirth-related causes in the U.S. each year and about 65,000 almost die. According to the outlet, about 60 percent of those deaths are preventable. That claim is backed up by the CDC, which reported in 2017 that research suggests at least half of all pregnancy related deaths are preventable.

There is no single reason to blame for the U.S.'s high maternal mortality rate. The CDC noted that there are serious racial disparities, with the risk of pregnancy-related deaths for black women being three to four times higher than for white women.

Lack of access to health care, chronic health issues, greater prevalence of c-sections, and confusion about how to recognize worrisome symptoms and treat obstetric emergencies (making caregivers more prone to error) all play a role, as reported by ProPublica.

The authors of the study note that U.S. women reporting the highest rates of emotional distress may impact their health, writing, "The relationship between emotional distress and health is complex, but some research shows emotional distress can exacerbate physical illness as well as lead to difficulties managing other aspects of life, such as the ability to work."

Out of all the countries included in the study, the United States is also the only one without universal health coverage, as noted by CBS News.

It's clear that more needs to be done to improve maternal health in the United States, including making access to healthcare easier. The new lives being brought into the world are important, but so are the women who give birth to them.