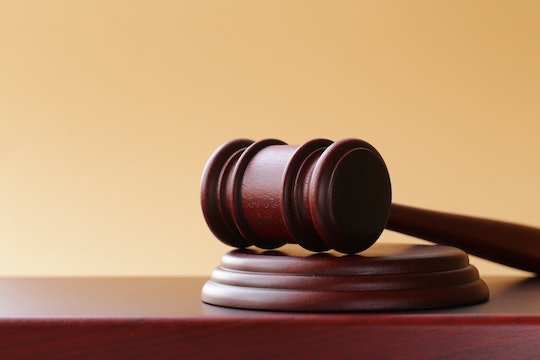 DOMA is history, gay marriage is legal in all 50 states, and yet members of the judiciary still think gay people aren’t qualified to raise a kid. On Tuesday, a judge ordered a Utah baby removed from her lesbian foster parents because the child would be better off with a heterosexual couple. In 2015. Yup. However, in the days since the story's gone viral — and garnered a ton of backlash in the process — the Associated Press reports that Judge Scott Johansen reversed his decision to remove the child, court officials said Friday.

The original ruling ordered that foster parents April Hoagland and Beckie Pierce — who had been fostering a baby for the past three months, according to The New York Times — relinquish custody to a heterosexual couple. Immediately, they vowed to fight back; and they weren't alone. By Thursday, the Utah Division of Child and Family Services officials announced it would appeal the decision if Judge Scott Johansen didn't revoke it. The state agency had also recommended that the child stay with the couple and filed a motion to stay the judge's order. Additionally, CNN reports that the baby's biological mother also publicly supported the couple's plan to adopt the child.

Hoagland and Peirce, who are married with two other children of their own, hope to eventually adopt the child. It was during a hearing about extending the baby’s placement with the couple more permanently that Johansen, a juvenile court judge, instructed the couple to hand over the baby within seven days so that she could be placed with straight parents. According to Peirce, Johansen allegedly cited research showing that children do better with heterosexual parents. Though Romper reached out to the Utah court Friday, a request for comment was not immediately returned.

It’s not clear what research Johansen could have been looking at, if he truly did cite such research. Maybe he was referencing the 2015 paper by Catholic priest/sociologist Donald Paul Sullins? The paper did claim to find higher amounts of emotional problems in children raised by same-sex parents, but it was also widely criticized for picking and choosing either stable or divorced families as benefited his conclusion.

On the other hand, an actual scientific literature roundup, conducted in January by researchers at the Columbia Law School, proved that the overwhelming scientific consensus from over 2o years of research is that — hold your breath — same-sex parents are just as good at parenting as heterosexual or single parents.

But stats aside, Utah Division of Child and Family Services also raised the very sensible point that disrupting the child’s life by moving her to a different family probably isn’t very good for her at all. As agency spokesperson Ashley Sumner told The New York Times Thursday, "We don’t want to disrupt this child’s life again.”

The great news here is that others in Utah actually stood up to Johansen — in fact, the whole Internet did — and the backlash against the case brought so much ire, he was eventually compelled to drop it.

Still, while it's not exactly clear whether or not the backlash is what led to Johansen's change of heart, the entire case still begs a question that can be summed up with this one tweet: