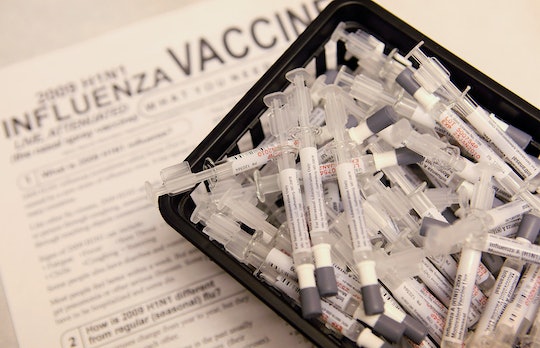 Here's Why Kids Are Still Dying From The Flu

It might seem obvious to state, but vaccines do keep people from getting sick. They also keep people, especially children, from falling ill with potentially serious illnesses that could cost them their lives. In fact, some illnesses that we don't think necessarily think of as being that serious can be very dangerous for young children, like influenza. A new study has shown that vaccinated kids are less likely to die from the flu. While that might seem like common knowledge, many children in the U.S. are still unvaccinated.

Getting "the flu" is never fun regardless of your age, but the illness can be particularly dangerous for children. According to the CDC, children under 5 years old are particularly at-risk for flu complications and often require hospitalization if they get sick. The good news is, flu vaccines exist and are effective against many types of influenza viruses. While it is true that anyone, a child or adult, can still get the flu even if they've had a vaccine, that's not because the vaccine is ineffective. According to the CDC, during some years a new strain of the flu might be circulating — one that current vaccines aren't specifically formulated to fight. That being said, there are also always other flu strains going around too — and that's why getting a flu vaccine is so important. Getting a vaccine means being protected against at least some of the flu viruses out there, which is better than not being protected at all.

The flu sometimes starts out like a bad cold: fever (although not always), muscles aches, coughing, and headaches. Little kids are more likely than adults to also have gastrointestinal symptoms like vomiting and diarrhea, according to the CDC. But unlike a cold or other common childhood ailments, the flu can last for weeks and have many serious complications. Because it's primarily a respiratory infection, children who have asthma or other conditions that affect their breathing can be particularly at-risk. Some of the most serious flu-related complications for anyone but especially children are pneumonia, sepsis, inflammation of the heart called myocarditis, and dehydration that can lead to kidney failure.

To try to better understand why children die of the flu, research published in the journal Pediatrics looked at the cases of more than 300 children who contracted and later died from the flu over the last few years. CDC data shows that children don't necessarily die in droves from the flu each year — a few hundred at most — but researchers still wanted to understand why any child succumbs to the illness.

The findings from this study are in line with current recommendations for flu vaccines for children. A previous report released by the CDC in 2013 found that 90 percent of children who had died from the flu during that season had not received a flu vaccine.

Each year, the recommendations for the flu vaccine change a little bit for everyone — adults and kids alike. That's because, as mentioned before, new strains can develop and medical technology continues to devise new ways to deliver the vaccine. The CDC recommends that everyone 6 months and older get a flu vaccine, and while many people opt for the flu shot, there are also nasal sprays available some years — depending on how well the CDC projects they will be effective. The CDC also recommends that the first time a child gets their flu vaccine that they get two doses instead of one — the second dose within 28 days of the first. The reason for this is that the initial dose is just a "primer" for the immune system, and the second dose is needed to actually provide immunity.

Children should be vaccinated each year, though after the first year they only need one dose. Anyone getting vaccinated should preferably do so before the flu season gets started, as it takes several weeks for immunity to build up. If it's a child's first year being vaccinated and they need that double dose, parents should work with their child's doctor to schedule those immunizations early enough in the season that immunity will be achieved before the virus begins circulating — typically no later than the end of October.

The flu can be dangerous for any child, even those who are usually fairly healthy. Vaccination doesn't only protect one otherwise healthy child, either: for classmates or peers who have conditions that make them at higher risk for the flu — and its potentially life-threatening complications — the flu shot can literally be life-saving.