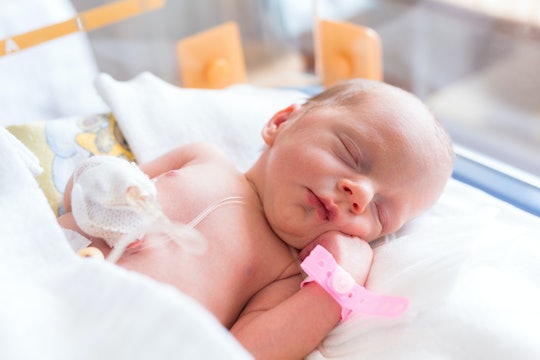 Vaginal Seeding Is A New Birth Trend, & Doctors Are Divided On Its Safety

A new birthing trend is gaining popularity among new mothers, despite being based solely on the misguided principle of "Eh, seems legit." I admit, I hadn't heard about this one before, and it seems like I shouldn't have to warn you, but swabbing C-section babies with vaginal fluids is potentially unsafe, and it certainly isn't beneficial, according to a study I never knew we actually needed. Lisa F Stinson of the University of Western Australia, told Science Daily that in her line of work, she's met C-section moms who "show an interest in vaginal seeding after reading about it on the internet." Yes, that's what people are calling it, and somehow that's not enough of a deterrent.

The thinking behind the practice goes like this: Babies born by C-section are at a greater risk for a variety of health conditions, and it's widely assumed that the difference between C-section and vaginally delivered babies' microbiomes — the microorganisms living on the skin, mouth, nose and gut — is a contributing factor. The most obvious difference between these groups is that one has contact with their mom's vagina, and one does not, so it's been theorized that closing that gap could boost the microbiomes in C-section babies.

"On the surface this practice makes sense," Stinson told Science Daily. "But there are certain risks, such as unintentionally transferring dangerous bacteria or viruses to the newborn." Additionally, it just plain doesn't work. "If passage through the vagina seeded babies with vaginal bacteria, we would expect to find these bacteria in babies born this way, but this is not the case." It's true that vaginally-delivered babies have a more robust microbiome than their peers, but they're not picking up those extra microorganisms on their way out of the birth canal.

Early-life gut microbiota do assist the development of the immune system, and without those extra cooties, C-section babies are at an increased risk for methicillin-resistant Staphylococcus aureus (MRSA), necrotizing enterocolitis, type 1 diabetes, inflammatory bowel disease, "and a variety of behavioral, cognitive, and mental health conditions," Stinson explained in an article for Frontiers in Medicine. That's a scary thing to hear about your baby! It's understandable that moms would want to do whatever they can to negate those risks, but unfortunately, vaginal seeding doesn't help.

And it can be dangerous; according to the British Medical Journal, the practice can introduce harmful pathogens to babies, such as herpes simplex virus, chlamydia, gonorrhea, and group B streptococcus, which is the most common cause of neonatal sepsis. And before you write off those risks, you should know that you can pass these infections to your baby even if you're asymptomatic. The American College of Obstetricians and Gynecologists "does not recommend or encourage vaginal seeding," and even cautions doctors that "Should a patient insist on performing the procedure herself," she should be thoroughly warned of the risks, and doctors should document the conversation to cover their own butts.

So if vagina magic isn't the answer to weakened microbiomes in C-section babies, what is? Stinson pointed out that C-section babies are less likely to be breastfed, and more likely to be born early or have mothers diagnosed with obesity, which could all be factors. But the most obvious culprit is probably antibiotics. They're routinely administered to moms before surgery, and they're known to disrupt gut microbiomes. This risk could possibly be neutralized by the future development of safe probiotic treatments for babies, or by waiting until after the umbilical cord is clamped to administer mom's meds, but more research needs to come first. As always, don't mess around with your health, or your baby's, without discussing it with a qualified medical professional.