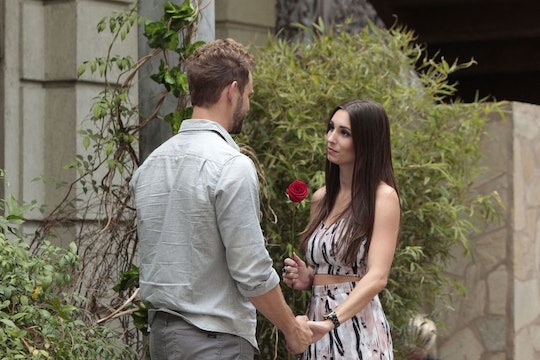 After a stellar one-on-one date this week, Vanessa was in a unique position to counsel Nick on one of the contestants he has left in the competition. In the middle of a pool party meant to stand in for the usual evening rose ceremony, Vanessa confronts Nick about Corinne on The Bachelor. Corinne's latest faux pas? Well, there are a couple. First, she admitted to the other women that she still has a nanny — as in, her childhood nanny — at age 24. She seems to be having some trouble performing basic household chores around the mansion without her, like rinsing a spoon. Corinne voices deeply missing her nanny Raquel in the house, and, honestly, it sounds exactly like a little kid who's away at summer camp and homesick for their parents. Some of the women take issue with this and bring it up to Nick, but Vanessa's concern is something else entirely.

Corinne spends the pool party hanging out in a bouncy castle as opposed to at the pool with Nick and the other women. He comes around to find her, and she pulls him in, engaging him in some playful (bikini-clad) horsing around. Of course, she takes the opportunity of one-on-one time to amp up their sexual connection and straddles him to make out. Vanessa sees this for a second and has a very strong reaction.

"I couldn't have asked for a better one-on-one date with Nick, but I'm confused, because I've seen Nick and Corinne getting pretty physical and it's just hard to witness it," she explains in a cutaway interview. "So I'm pissed off. Honestly, I just don't want to be here right now." Finally, she confronts Nick and admits, "I guess I question what your intentions are because I know what we had the other night was really special and then the thing with Corinne happened."

She explains that what she means by that is witnessing her straddling him in the bouncy castle, and how confusing she finds it. Notably, she points out how Nick is shooting himself in the foot, based on what he's said his concerns about being on the show are:

Like you said, you know that coming on the show and being The Bachelor — there's a lot of speculation around you and you're going to be judged and questioned for things that you do. So I was just wondering why would you do something like that knowing that.

Nick is stumped, and then Vanessa really hammers it home. "I'm not judging Corinne," she says. "I'm judging your actions. It was enough for me to question: are you looking for a wife? Are you looking for someone to just f*ck around with? Because, at that point, I'd rather you just not give me a rose."

That's when the episode ends, but suffice to say, this is one of the best indictments of a Bachelor in Bachelor history. (And Vanessa isn't even one of the attorneys!) She clearly points out how Nick contributes to a perception of him that he doesn't really like and he seems to genuinely take her in. We'll have to wait until next week to see what he does about Corinne, but we do know that even Chris Harrison gets involved at one point.