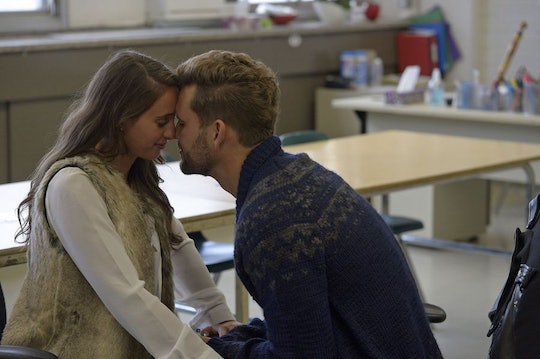 Vanessa Grimaldi May Be Planning A Wedding

The end of The Bachelor is near: after weeks of eliminating women who showed genuine interest in him and putting on questionable sweaters in Finland, Nick Viall is getting ready to make his final choice. The end of the season was already partially spoiled by the reveal of Rachel Lindsay as the next Bachelorette; even though she and Nick had been connecting, the early announcement made it clear they didn't end up together. Now it's down to Vanessa Grimaldi and Raven Gates, and the end might have been spoiled yet again because Vanessa went wedding dress shopping, which could mean that she's the one Nick ends up getting engaged to.

Of course, there could be a totally innocent reason for a woman who is on a show that's all about getting engaged to be spotted in a wedding dress shop. It might have nothing to do with the potential upcoming engagement that fans are looking forward to on The Bachelor. The Montreal store that Vanessa was visiting, Le Chateau, isn't just a bridal shop; they also sell regular, non-wedding attire. Perhaps Vanessa just conveniently posed for the picture in front of all the wedding stuff? It's possible the whole thing is simply a misunderstanding and coincidence, and the final reveal totally wasn't spoiled ahead of time.

Vanessa didn't post the picture herself, nor has she commented on it yet on her own social media. The image appeared on the account of Le Chateau's creative coordinator Holly Wiancko, who captioned it, "A good way to end the week at the office!" along with a rose emoji. Vanessa seems to have a good relationship with the store because she's been featured on their social media before, so it really is possible that she just stopped by and was photographed in front of the most incriminating backdrop possible.

According to TMZ and their sources, Vanessa was invited to the shop to see their new line and discussing the possibility of a partnership once The Bachelor is over. TMZ's sources also specified that Vanessa didn't actually try on any wedding gowns. So going by that, it would appear that Vanessa's reasons for popping in to peep at some wedding dresses was totally unrelated to the upcoming wedding that she may or may not be having.

Still, the timing does feel like a big coincidence. A lot of fans are convinced Vanessa will be the one to win when the season comes to a close, and if that does turn out to be true, then this could definitely have spoiled the surprise.