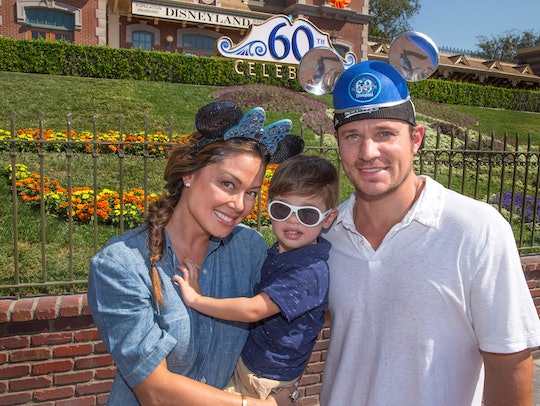 Vanessa Lachey To Preemie Moms: It's OK To Be Afraid

If there's one thing that immediately jumps out when meeting Vanessa Lachey, who is gearing up to host Top Chef Jr. starting on Oct. 13 on Universal Kids, it's that she absolutely loves being a mother to her three little kids. To her, motherhood changes everything about your life. It also means you have to prepare for the unexpected. In fact, on Monday's episode of Dancing with the Stars, the TV host recently opened up about the difficult birth of her youngest son, Phoenix, born in December of last year. And, as a result, Vanessa Lachey has an important message for mothers who have faced premature births, like herself. Talking with Romper in anticipation of her new series Top Chef Jr., Lachey shared a little more about how she got through one of the most difficult times in her life.

During the "Most Memorable Year" week on Dancing with the Stars, Lachey revealed that Phoenix, now almost a year old, was born dangerously premature at just 29 weeks old. In the introductory video package before her performance, Lachey was extremely candid about the terrifying experience. She remembered thinking, "Don't worry about me. Just make him OK." Luckily, he was OK, and is now a healthy, happy boy. Looking back on the experience, Lachey has some words of advice for other mothers going through the same thing. "I would suggest — not tell — but suggest people don’t be scared to reach out," she explains. "It’s always nice just to sometimes talk about it and then hug it out."

Lachey readily admits that the ordeal was a really "scary time," but she says she's able to talk about it now because she had such a great support system. In fact, one thing that she emphasizes is the importance of knowing that "it's OK to feel vulnerable and it's OK to feel scared." So never be afraid to feel what you're feeling. She adds:

It’s not perfect all the time, but there could always be a happy ending. And you know I look at him now and I’m just so grateful that he is happy and healthy and giggly.

Phoenix Robert has two older siblings — a five-year-old brother named Camden and a sister, Brooklyn, who is two. Lachey admits that she brings all three of her kids into the kitchen to teach them to cook and especially likes cooking with Phoenix because he just sits on the counter and smiles. As adorable babies do.

It can be incredibly difficult for people to share such intimate and emotional moments with anyone, much less a huge audience of strangers. Lachey's bravery for speaking so honestly about this experience is admirable, if not inspiring. Of the short story featured on Dancing with the Stars, Lachey was so pleased with how it turned out and "appreciative that they did this really beautiful package." With her dance partner Maks Chmerkovskiy (who is a new parent himself), Lachey then performed a rumba to her husband Nick Lachey's version of the song “Godspeed (Sweet Dreams)," inspired by the experience.

It is always powerful when women like Lachey, women with a platform and listening audience, share such personal stories to the public, because in reality, there are a lot of women going through the exact same thing. While parents dealing with the premature birth of their child may feel alone in the world, in fact this issue is unfortunately very common. According to the Center for Disease Control, the preterm birth rate in the United States in 2015 was 9.6 percent, which means that almost 1 in 10 babies were born premature. Lachey talked about how important having a strong support system was for her to get through it. For other mothers and fathers who may feel alone in this experience, my hope is that Lachey's story will provide them with some solace by showing them that they are not alone after all.

Now, with the premiere of her new show Top Chef Jr., a winning streak on Dancing with the Stars, and three beautiful kids at home, it looks like Lachey is living her very best life, which is an inspiration not just to moms, but to everybody going through a rough time.