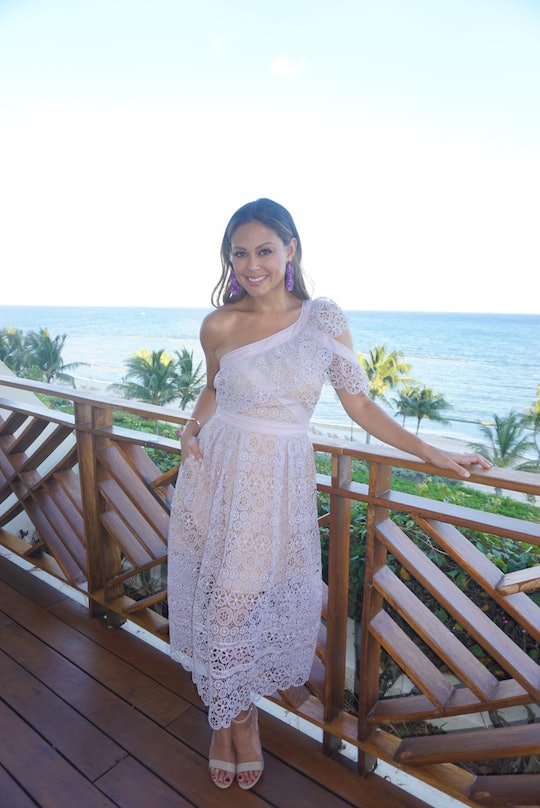 Vanessa Lachey Admits No Parent Has It Together & It's Refreshing AF

As a mom to three young children, Vanessa Lachey understands the pressures of parenting. Nearly all parents can relate to the stress of bending to an impossible standard prescribed by social media and celebrities aren't any different. But in the era of filters and edited conversations, Lachey is embracing a whole new perspective. She's leaning towards honesty instead, in hopes that all parents will follow her lead.

Romper recently spoke to Lachey, who has recently partnered with the brand Water Wipes, over the phone to talk about motherhood in the digital age and This Is Parenthood — a 16-minute YouTube documentary that officially launches today. The short features several parents through pregnancies, birthdays, back-to-work transitions, and relationships. "When I heard about this campaign, I was like, 'This is what I’ve been trying to put into words, or trying to tell people or trying to express.' And I could never do it as beautifully as they could in this documentary, created by Lucy Cohen," Lachey tells Romper over the phone. "Now I just want to spread the word and encourage people to check out this documentary and encourage people to start an open and honest conversation about parenthood."

As a mother of two who lives and breathes these types of conversations with other mothers, I can attest to the difficulty in letting others see my scars. It's as if by being transparent with the harder parts of parenting, I'm outing myself as an incompetent failure. The documentary moves the conversations from the image of what people believe parenting to be, to what it actually is.

"So often, we as parents feel the pressure to pretend everything is perfect – when the reality is that we might be juggling twenty things at once, and feeling insecure or overwhelmed or like we’re failing at all of them," she continues. This Is Parenthood is a glimpse at all the highs and the lows of being a parent in an honest, real, way.

Lachey already had two young children when her youngest son, Phoenix, was born 10 weeks premature. She said his birth "turned their world upside down." No kidding!

But having a premature baby changed so much more than the way Lachey parented. "Having a preemie gave everything a whole new meaning," she says. "Everything was heightened and there was a lot of stress and pressure on myself." She adds that doctors told her, by the time preemies are two-years-old, they're supposed to be developmentally caught up. The documentary exposes the realities of parents in all sorts of situations — some like Lachey's, and others, maybe, like yours; like mine. I can relate to the mother who straight up says she didn't necessarily love becoming a mother instantaneously. Between mood swings and severe Postpartum Depression (PPD), I felt like I was failing for a long time. I mostly still do. We all have our stories. Seeing the way others tell theirs through this lens may be the inspiration you needed to rock the mom (or dad) thing today.

If there's anything this life-changing 16-minutes will reveal, Lachey wants parents around the world to know, if you feel you’re constantly failing, "that’s normal, and that’s OK." And honestly, this conversation came at a time I really needed to hear those words — and maybe you do, too.

"I feel like this day and age, with social media we’re always trying to keep up with the Jones’s and It’s a lot of pressure," Lachey says. "It’s hard to be a parent in general, and then feel like you’re constantly failing. And I guess I want to be a shoulder to lean on." Lachey says the same applies to the way she mothers her own children. At home, she's constantly reminding herself she's "doing a good job," too, despite the times social media portrays otherwise. "What I'm doing may not be what someone else is doing on Instagram, but I guarantee they’re not putting everything out there — that they’re making mistakes."

I can relate, for sure. I often (unintentionally) refer to social media as a means of punishment instead of inspiration. I make mistakes — a lot of them — but navigating those kinds of discussions with honesty through an Instagram post always feels inauthentic even when I'm at my most vulnerable. With my two kids watching and listening to everything I do and say, I'm cognizant of the role social media plays in their lives, but also in mine. I don't want to live for "likes" in order to feel OK about the job I'm doing with my children, but I do hope we can initiate more conversations about the challenges that come with becoming a parent, alongside those triumphs so other moms feel less alone; less like they're failing because of those impossible standards set (that aren't even real, BTW).

Lachey admits that some days she feels so overwhelmed by her workday, it can be hard to regain perspective. Um, same. She confesses there had been a day recently where she'd been on her feet for 13 hours, shooting for work, and when she arrived home, her six-year-old son, Camden, hadn't seen her all day and wanted her immediate attention. But, as a lot of parents can understand, she felt so drained, it was hard to immediately morph back into mom-mode and had a small kerfuffle before sending herself off for a time-out (super relatable).

If you're reading this is nodding your head along with me, Lachey wants you to know, it's OK to say "I need a minute." That's just what she did, excusing herself for a moment to think about what happened, and how best to move forward in the best way for all. She returned to her son, gave him a hug, and reset the household tone. "I realized there’s no perfect parent," she says. "It’s how you handle a situation, and I think that’s what we also forget is how to take care of ourselves."

As a mother of a 12 and 7-year-old, I feel that to my core. The 16-minute documentary also explores the dynamics of relationships and how they're affected once a child is introduced. "That is a massive part of parenthood," Lachey says. "They shine a light on that. It isn't’ all roses and butterflies. This is real. We had a kid, and the kid rocked our world, and now we’re challenged as a couple."

At a time when more parents are in search of integrity and transparency, This Is Parenthood fully encapsulates the best of parenthood and the worst in the most profoundly beautiful way. There are other parents out there who feel exactly as you do — I'm one of them. You're not alone in this thing.

And if you're still in doubt about your capabilities, let Lachey's words to me be yours as you need them: "You’re an amazing momma. You feel guilty, you feel like you’re not doing enough, but you are. I wish I could be there and give you a hug."

Editor's note: This article has been updated for clarity.