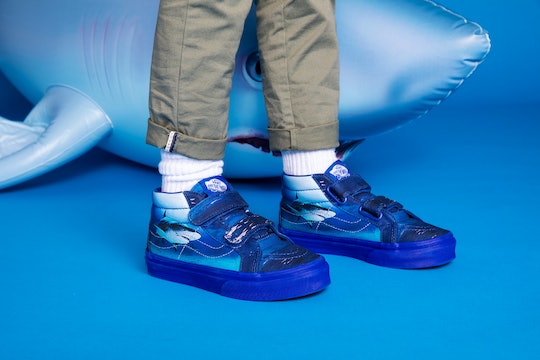 Vans, known for their cool, street-style sneakers and apparel, is celebrating Discovery Channel's upcoming Shark Week programming with a brand new shark-themed line of Vans kids and adult footwear, t-shirts and accessories. If you or your child is obsessed with sharks, and a certain song about sharks (I'm sorry if I've just put "doo doo doo doo" in your head!), then you're going to go nuts for these designs. On July 1, the full collection will launch in Vans stores as well as Footlocker, Nordstrom, Urban Outfitters, and other specialty retailers. The line, centered around kid's product apparel and footwear, will range in price from $28 to $75.

Discovery Channel's Shark Week has become an annual pop culture phenomenon for shark and nature-lovers alike. Each year, Shark Week brings viewers along on a week-long journey to uncover the secrets of the ocean’s most frightening creature. With the help of nearly two dozen of the world’s most respected marine biologists and science institutions, Discovery Channel will showcase brand new, innovative shark research technology and compelling insight on some of the most unique shark species in the world. According to a press release from Discovery, this year's Shark Week will take viewers to the depths of the ocean in search of Deep Blue, employ the first ‘drone-towed’ seal decoy, and test some of the most exciting, cutting-edge technology for shark detecting surveillance. The audience will receive a 360 multi-platform experience, thanks to new partnerships with shark experts and nonprofit groups uncovering the latest shark discoveries and trending shark topics around the globe. Pretty cool!

The popularity of Shark Week has also developed into a massive, global merchandising program, making it a perfect fit for Vans, who are known for their playful yet cool, street-smart footwear and apparel. Some of my favorite designs from their Shark Week collection include the pair of toddler slip-on canvas shoes ($35) featured below and the abstract colors of this classic Vans style. I can fully admit to preferring sharks when they're in cartoon form and sitting in a pool float more than the vision of an actual shark coming at me in the water. EEK!

Here's what I love most about this collaboration between Vans and Shark Week: a portion of proceeds will benefit Oceana, a charitable organization dedicated to protecting and restoring the world’s oceans on a global scale. What better time than Shark Week for Discovery and Oceana to team up and help protect sharks, which are threatened by a global shark fin trade that includes fins from as many as 73 million sharks each year. The fight against this brutal, wasteful practice is supported by collaborations with major brands like Vans that raise money for Oceana’s campaigns and create content to educate fans about why healthy oceans need sharks.

Ocean Conservancy, another Discovery charitable partner, helps clean up beaches and inland waterways across the country to keep our waters clean for sharks and the other marine life that live in them. Did you know more than 8 million metric tons of plastic enter our ocean every year? Ocean Conservancy is working around the world to stop the flow of plastic into the ocean by 2030, and organizes the world’s largest volunteer effort on behalf of the ocean, the International Coastal Cleanup. To find a local cleanup near you, check out www.signuptocleanup.org.

What better excuse to teach your child about protecting the world's oceans, and the creatures inside them, than with your Vans purchase or while watching Shark Week together? It's never too early to educate your child about taking care of the Earth and ways to give back, whether it's financially or with your time, as they're both equally important.

Shark Week will air on Discovery Channel from Sunday, July 28 through Sunday, August 4.