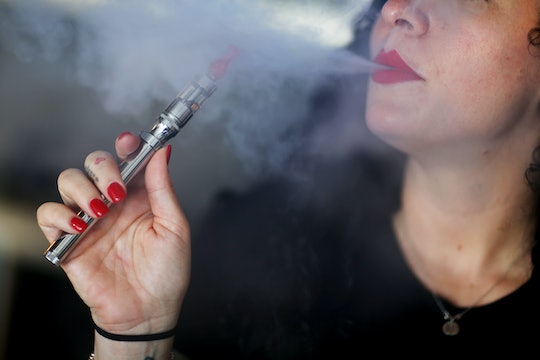 Vaping-Related Illnesses Are Continuing To Rise, According To The CDC

The U.S. Centers for Disease Control and Prevention (CDC) announced Thursday that vaping-related illnesses have continued to rise with 805 confirmed or probable cases reported across 46 states and one U.S. territory as of Sept. 24. But it isn't just the number of illnesses seeing an uptick. The number of vaping-related deaths is also up, with the CDC now reporting 12 confirmed deaths in 10 different states. While the specific cause of the lung-injuries remains unknown, the CDC's latest update shows the number of vaping-related illnesses and deaths in the United States have nearly doubled in the last two weeks.

Although the CDC's investigation into a mysterious outbreak of lung injuries has yet to hit upon a specific cause, the federal agency has identified a common thread. "All reported cases have a history of e-cigarette product use or vaping," the CDC said in an update posted to its website Thursday.

But the term vaping — which Merriam-Webster defines simply as inhaling "vapor through the mouth from a usually battery-operated electronic device that heats up and vaporizes a liquid or solid" — can refer to either nicotine or cannabis. And although a significant portion of legislators' response and concern has so far focused on nicotine based products, the CDC has said that THC use has been found in a number of cases.

Still, the CDC has been careful to note that it does not yet know the specific cause behind the recent outbreak of lung injuries. In fact, the agency stressed Thursday that no specific e-cigarette or vape product (be it refill pods, cartridges, liquids, substance, or devices) had been found to be linked to all cases. "All patients have a reported history of e-cigarette product use, and no consistent evidence of an infectious cause has been discovered," an update from the CDC noted Thursday. "Therefore, the suspected cause is a chemical exposure."

Earlier this month, after the CDC recorded six deaths and more than 450 cases of vaping related lung illnesses, U.S. Food and Drug Administration (FDA) modified its policy on flavored e-cigarettes and vaping products. As outlined in a press release from the agency, the FDA's new compliance policy is aimed at "clearing the market of unauthorized, non-tobacco-flavored e-cigarette products."

On Wednesday, Bloomberg reported that acting FDA Commissioner Ned Sharpless had clarified in a hearing before the House Energy and Commerce Subcommittee on Oversight and Investigation that this did not mean flavored e-cigarettes would be banned from the market outright. Instead, such products would be forced off the market unless, or until, their manufacturers could submit scientific evidence proving their product was appropriate in terms of public health, Bloomberg reported.

But recent public concern over the vaping-related illness has caused at least one retailer to remove e-cigarette products from its shelves, according to NPR. On Sept. 20, Walmart announced plans to stop selling e-cigarettes at both Walmart and Sam's Club stores, NPR reported. Additionally, some state and local governments have also moved to ban the sale of flavored e-cigarettes. According to CNBC, legislators in Michigan and San Francisco have moved to bar the products' sales.

The CDC warns anyone with a recent history of using an e-cigarette or vaping product who begins to experience symptoms like shortness of breath, chest pain, cough, nausea, vomiting, diarrhea, fever, fatigue, or abdominal pain to see their health care provider.