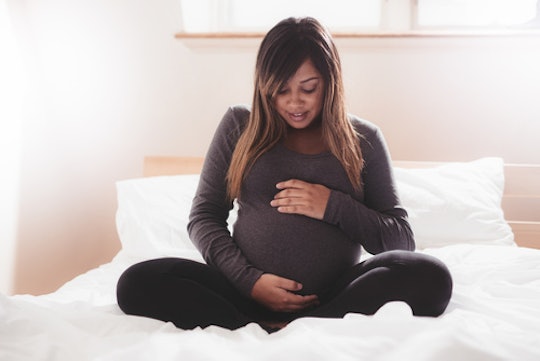 Here's Why VBACs Might Be Safer Than C-Sections, According To A New Study

For anyone who has previously had a cesarean section, deciding how to give birth a second time can be a confusing process. The decision of whether to go with a vaginal birth after cesarean (VBAC) or an elective repeat cesarean (ERC) is difficult for many women, especially those who are unaware of the benefits or consequences associated with each. The Discharge Abstract Database of the Canadian Institute for Health Information has released a new study, in which it found that VBACs can be safer than c-sections, but there's a catch.

The study, released in the Canadian Medical Association Journal, found that there is a slightly high risk of complications associated with attempted VBACs. Researchers worked with a very large pool of 197,540 women to conduct the findings. Each woman was pregnant with only one baby and delivered at term; they all had one prior cesarean and no prior vaginal deliveries. According to Science Daily, researchers pulled information from hospital deliveries throughout Canada, excluding Quebec, between 2003 and 2015.

"The absolute rates of adverse maternal and neonatal outcomes are low with both attempted VBAC and elective repeat cesarean delivery," said Dr. Carmen Young, University of Alberta, according to Science Daily. "Both are reasonable options for women in general; however, attempted VBAC continues to be associated with higher relative rates of severe adverse maternal and neonatal outcomes compared with an elective repeat cesarean delivery."

So how does this mean a VBAC can be safer?

However, when a VBAC was successful, the overall rates of complication were lower than if they had a second c-section. Motherly also noted that researchers suggest VBACs may be better for women who plan to continue having children, because it's unlikely to have a successful VBAC after two or more c-sections.

In short, what's important to note is the distinction between attempted and successful VBACs. Since the language of this study can be confusing to follow, let's borrow from a breakdown by VBAC Facts. Instead of using attempted / failed or successful VBAC, or grouping them all under the same category, author Jen Kamel's breakdown helps to understand what the study is actually saying:

"The pattern we have seen here has been replicated many times. We see that VBAC has the lowest complication rate followed by ERC, LAC, and CBAC," Kamel wrote.

Using attempted VBACs as a comparison group in the study shifted data, because it included two extra categories outside of "successful" VBACs: labor after cesarean and cesarean birth after cesarean. In the end, vaginal deliveries are associated with lower overall complication rates than cesareans that occur during labor, but it's important to recognize how a study is grouping their data.

This study is increasingly relevant as overall c-section rates continue to rise. According to the World Health Organization, the ideal rates of c-sections worldwide is between 10 and 15 percent. However, it is closer to 32 percent in the United States and at approximately 26 percent in Canada. As Young notes in Science Daily, "This topic is an important issue because rates of cesarean section continue to rise and the most common single indication for a cesarean delivery is a prior cesarean delivery."

Ultimately, there are many factors to consider when weighing an elective c-section versus VBAC. There are many factors involved, including future family plans and the reasons for the previous c-section, and it's a decision that should be weighed with medical professionals familiar with your case.

"Because the choice between delivery modes is so personal, it's up to clients to evaluate and interpret the risks," Young told Science Daily. "Our research highlights the importance of appropriate patient selection as well as the importance of careful monitoring in labor and delivery to optimize their safety."