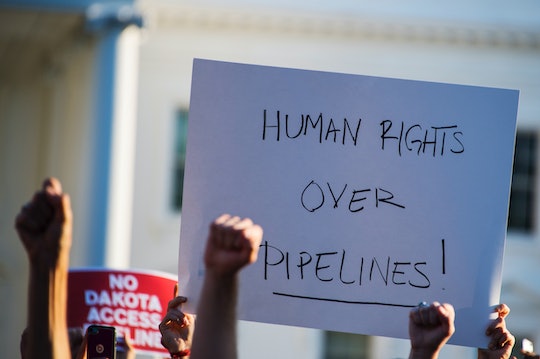 North Dakota Gov. Jack Dalrymple and the U.S. Army Corps of Engineers have ordered the Standing Rock protesters to evacuate their camps by Monday. The Standing Rock Sioux tribe, as well as their supporters, are showing no signs of backing down from their protest against the Dakota Access oil pipeline. As temperatures continue to drop and emergency supply lines get cut off, the Standing Rock Sioux tribe is sticking by their honorable cause, despite the immense difficulties. And now, the protestors will be joined by another, perhaps surprising group of allies: Thousands of veterans heading to North Dakota to join Standing Rock protestors are ready to answer the call for solidarity and support.

The Los Angeles Times reported this week than an estimated 2,100 U.S. military veterans would be joining the protest in "mass show of support for Native Americans and their allies battling the Dakota access oil pipeline." They organized under the banner "Veterans Stand With Standing Rock" and will converge in North Dakota from all across the nation. The veterans plan to give the protestors who have been demonstrating for months a much deserved break, as well as call attention to the violent, militarized force that has been used against the peaceful protestors so far.

"People are being brutalized; concussion grenades are being thrown into crowds," Ashleigh Jennifer Parker, a Coast Guard veteran and spokeswoman for Veterans Stand for Standing Rock, told USA Today, speaking about the alleged dismal mistreatment occurring in North Dakota. "They're spraying people, even old women, and other elders of the tribe with tear gas and pepper spray and all of this is just unconstitutional."

Parker went on to say that she and her fellow veterans hope that if they "stand together in formation and look the aggressors in their face ... if they can treat us the same way (as they have the protestors) then that should showcase to the American people what's going on up there."

The veterans' willingness to stand in front of rubber bullets, tear gas, and other violent law enforcement tactics is brave and undoubtedly helpful to the protestors, however, it's disheartening that the abuse suffered by the Native American protestors wasn't enough to "showcase" what has been happening in North Dakota.

The veterans will begin arriving on Sunday, Dec. 4 and plan to stay until Dec. 7. Some plan to stay indefinitely. Despite the governor's orders to abandon the campsites by Monday, the veterans will meet in a high school gym on the Standing Rock reservation on Sunday to break up into platoons and companies. The LA Times reported that they will then head directly to the front lines of the demonstrations to put themselves between the Native American protestors and law enforcement.

Much like the Sioux tribe, who have been fighting the pipeline for months, the veterans have one very important resolve: to remain peaceful in the face of extraordinary injustice. And in the overall stand against the pipeline project itself, perhaps, with attention turning to these military vets, the native communities that have been fighting there peacefully for so long already will finally get the attention they rightly deserve.