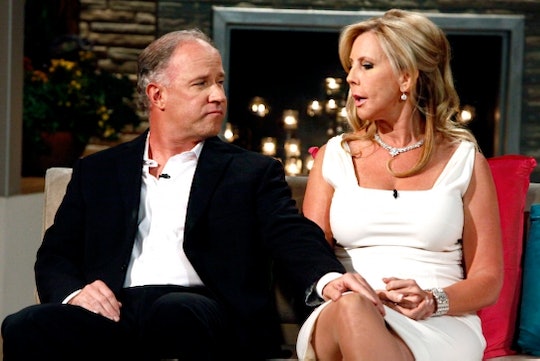 Vicki Claims Brooks Probably Doesn't Have Cancer, So Now It's Time To Let That Storyline Go

What would a Real Housewives Of Orange County reunion be without its fair share of satin, tears, and drama (to the constant delight of host Andy Cohen)? And, of course, Sunday night's new episode had plenty of it, as Vicki Gunvalson finally claimed that Brooks did not have cancer — or at least, her gut doesn't think he did.  So, after 22 episodes, multiple investigations by the always skeptical Meghan King Edmonds, and a seemingly endless slew of tabloid headlines, where do we stand? Maybe Vicki's ex Brooks Ayers has cancer. Maybe he doesn't. So, we're right back where we started, then? OK, cool.

But not really. Because after an entire season devoted to either an incredibly invasive look into someone's ill health, or to giving press to a someone who would fake a cancer diagnosis, the storyline has gotten less engrossing and more, well, gross. Does Brooks have cancer? We might never know, and we shouldn't need to know. And that's why Season 11, and, yes, Meghan, needs to move on — let's drop the cancer storyline like it's as hot as a Tamra exercise tape.

Housewives fans might not have a choice but to let the storyline go, of course. Since Vicki and Brooks split up, it's unlikely that the latter will show up on the series. But his ghost very well might — if the rumors that Housewives wants OG Vicki gone aren't true. Feuds have their way of lingering, and considering how vicious things got during Season 10 — remember Tamra's party? — it's not unthinkable that the show might try to stretch the juicy plot.

But there are so many reasons why we Housewives fans need to live by the words of the wickedly talented, one and only Adele Dazeem and just let it go.

That's right, Heather — it's not the classiest thing in the world to inspect one's health record, no matter how suspicious it might seem. Would you want your colleagues to ask you for medical records when you call in sick Monday morning "with a cold" after a particularly great night that included a Keeping Up With The Kardashians marathon drinking game? No, no you wouldn't. Even if they should. And if Brooks is lying about his health, like you are about your cold, the idea of giving someone who would fake a cancer diagnosis press is even more disgusting than whatever happened after your Keeping Up With The Kardashians marathon drinking game.

We'll Never Find Out An Answer

At least, not anytime soon. Private health records are private health records, so as long as Brooks maintains his diagnosis – as he did during an interview with Cohen — we'll always be left questioning. And, as we learned from Lost, spending several seasons asking the same questions can get quite frustrating, so let's just leave this mystery in the same vault as Walt's special powers.

There's So Much More To Fight About

These women feed off of drama like you feed off of Chipotle. Brooks' cancer storyline has simply gotten boring. Ladies, we need something else to focus on — a new beau for Vicki? A new hairstyle for Meghan? My god, literally anything at this point would be more interesting than Brooks' alleged cancer lie. So, during Season 11, let's just pop open some Prosecco and fight over silly little things like religion and divorce like we did in the past, OK?