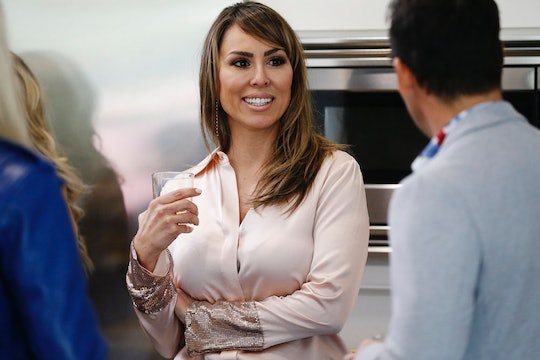 Vicki & Kelly's Friendship Is On The Rocks On 'RHOC'

Vicki Gunvalson didn't appear in the first episode of The Real Housewives of Orange County Season 14, but her presence was still felt. She had a falling out with Kelly Dodd in Season 13 and the reverberations are rebounding. When they cross paths at Tamra's housewarming party in Episode 2, a big blowup is bound to result. Vicki and Kelly's feud on RHOC is one that won't be easily untangled.

A trailer for Episode 2 on Bravo's website shows a hint of what's to come with Kelly and Vicki. Words can barely describe it. In a scene that's sure to become instantly iconic, Kelly sends an Animoji of a pig, received by Shannon and Tamra, that proclaims, "You wanna f*** with me, you little pig of a f*****g b****?" Then when Vicki asks to talk at the party, Kelly declares that she has nothing to say to Vicki and demands to be left alone before storming off. Is Vicki the recipient of the pig emoji? One can only guess, but it's clear that these two women are not on good terms.

Vicki and Kelly used to be close until Vicki set up Kelly's ex-husband Michael with someone new, then proceeded to go on double dates with them and her now-fiancé Steve Lodge. Kelly felt betrayed; Vicki was defensive. The spat reached new levels at the Season 13 reunion when Vicki accused Kelly of doing cocaine. With all that bad blood between them, it doesn't seem like this friendship will ever be repaired.

Kelly has made it clear she has no intention of making up with Vicki any time soon. While speaking to E! News, she said that she doesn't think she'll "ever be friends with Vicki again." She felt that Vicki had done "too much damage" to her life and she didn't want to deal with the negativity. Kelly wanted to be supported and loved by her friends, not surrounded by people who "spread rumors and lies." In fact, Kelly's issues with Vicki appear to have bubbled over into her friendships with Tamra Judge and Shannon Storms Beador, too.

Vicki, Tamra, and Shannon are famously besties, often referring to themselves as the Tres Amigas. Kelly told Us Weekly that she felt antagonized and picked on by all three of them, because they banded together and didn't include her. It sounds like Tamra and Shannon might have ended up on Team Vicki. "Tamra just said that she never wants to talk to me ever again," Kelly revealed. "And that's fine, because I don't ever want to talk to her again."

The trailer for Episode 2 shows an altercation coming between Vicki and Kelly, but it doesn't look like they mended fences at all during the rest of Season 14. Their tension has continued post-filming, with Kelly calling Vicki a "senior citizen" with stale storylines during an interview with People and Vicki responding furiously in an Instagram comment. There have been plenty of feuds in Housewives history (it took Tamra and Shannon some time to forgive Vicki after their own falling out) but this one seems especially difficult to overcome. Never say never, but it doesn't look like Kelly and Vicki will be BFFs again any time soon.