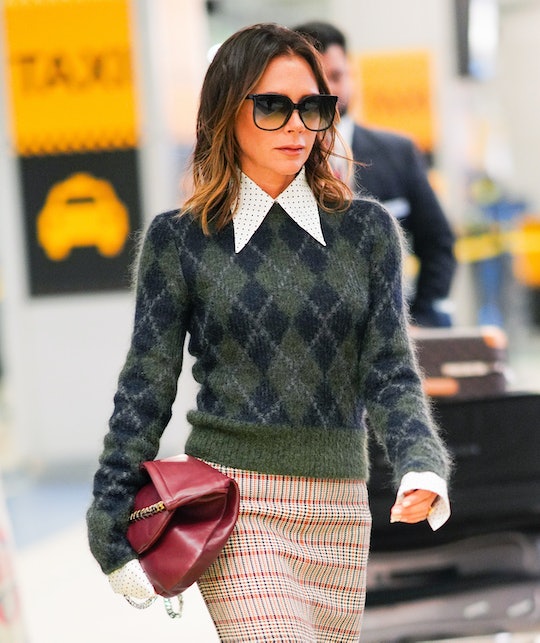 While Posh Spice may not have been able to reunite with her former girl gang for the Spice World 2019 tour earlier this year, she recently proved that once a Spice Girl, always a Spice Girl. Indeed, Victoria Beckham danced to a Spice Girls' hit with her 17-year-old son Romeo in a TikTok video that has since gone viral. But while Beckham showed she's still got the moves, her son wasn't quite as familiar with how to "slam it to the left" and then "shake it to the right."

Beckham recently joined her son Romeo for a little dance break in their kitchen in a TikTok video he captioned with the hashtag "#poshmum." Of course, when Posh Spice is your mom you're not boogieing down to just any old song, you're bopping along to a Spice Girls tune. Specifically, Beckham and her son danced to the Spice Girls' 1997 hit "Spice Up Your Life."

In the video, Beckham can be seen immediately jumping into the dance, raising and lowering her arms in time to the music while her son takes a few seconds to get on the beat. The two then "slam it to the left" and "shake it to the right" as instructed by the song before Romeo gives his best spin and the video cuts off.

If you're thinking the duo's moves look a tad familiar, then you, like me, have seen Spice World, the 1997 Spice Girls movie. Yes, that's right. Beckham didn't just dance to a Spice Girls song with her son in her kitchen, she recreated the "Spice Up Your Life" dance performed in the Spice World movie 22 years later, move for move. Perhaps just as many of us can't forget the girl group's catchy tunes, Beckham just can't shake the troupe's choreography?

While none of Beckham's four children — 17-year-old Romeo is joined by 20-year-old Brooklyn, 14-year-old Cruz, and 8-year-old Harper — are old enough to have experienced Spice mania, Romeo isn't the only one to celebrate his mom's musical past. Earlier this year, Beckham shared a photo of daughter Harper striking her best Spice Girls inspired pose while standing next to an throwback picture of Beckham as Posh Spice. "When u bump into Mummy Spice!" Beckham wrote in the photo's caption on Instagram.

Beckham married soccer star David Beckham in July 1999, roughly two months after Brooklyn was born and just over a year before the Spice Girls announced they were going on an indefinite hiatus. Since then she has grown her family and launched her own fashion line. Still, it seems that while you can take the girl out of the Spice Girls, you can't take the Spice Girls out of the girl.