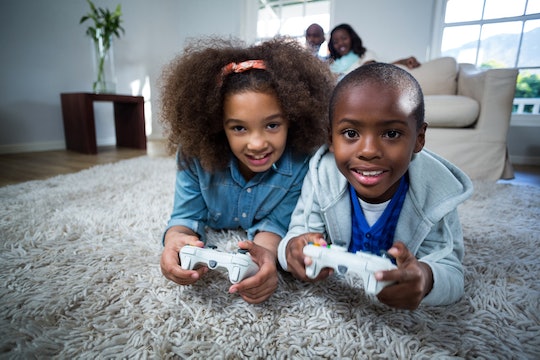 Video Games May Affect Your Kid's Grades, New Study Finds, But It's Not As Bad As You Might Think

As video games increase in popularity, many parents anxiously wonder what impact gaming has on kids — especially in school. With video games constantly improving with visuals and concepts, it's easy for kids to spend hours playing each day. But, while a new study did find that video games may affect your kid's grades, it's not as bad as you might think.

Gaming has been really popular for some time now. According to the Pew Research Center, more than two-thirds of American adolescents report playing computer games. For many, online gaming has also became a new avenue for connection, as Pew Research Center reported 57 percent of teens ages 13 to 17 have made friends online.

The cultural impact of gaming has long been up for debate. Most people have heard video games take the blame for violence or aggression. And when it comes to school work, parents often worry that video games serve as a distraction. Besides, what could you possibly learn through games?

Video games' true impact on kids' grades hasn't been entirely understood, thanks to mixed study results. In 2010, for instance, a study found that video games can hurt schoolwork. But, in 2016, The Guardian reported on a study showing positive links between videos games and academic performance.

So, in the words of Oprah, what's the truth?

Researchers conducted their study by following 3,554 adolescents for two years, according to PsychNET, and 56 percent of participants were girls. PsychNET reported that researchers tracked gaming habits and grades, along with testing core competencies in reading and math.

And what did they find?

Intensive computer gaming did have a negative impact on grades, as reported by Fatherly. However, that impact was so small it's practically insignificant. Children could play for up to eight hours a day with very small academic effects, Fatherly noted.

...mathematical and reading competences were not affected by gaming times. Thus, playing computer and video games can result in a noticeably, albeit small, loss of educational returns, but it does not affect basic competences.

In other words, video games themselves don't seem to have enough of an impact on grades to stir up so much anxiety.

Researchers suggest, according to Fatherly, that parents focus more on when video games are being played instead of how many hours kids play. Helping kids to find a good balance, such as playing games only after homework is done or tests are studied for, is probably better in the long run.

Clearing the name of video games is pretty important in the long run. As noted by a 2004 Science News article, video games can be good for students; they offer new methods of learning and engagement. "Kids diagnosed with ADHD because they can't pay attention will play games for 9 straight hours on the computer," James Gee, education professor, told Science News. "The game focuses attention in a way that school doesn't."

Video games are another example of how it's easy to be afraid of technology, without recognizing what it can do. Gaming by itself isn't bad and, as this recent study showed, it doesn't have a significant impact on kids' grades.

They should be understood as tools that parents, teachers, and children can use. And by doing so, parents won't have to feel like they're constantly in a losing battle with video games.

More Like This
What Is RSV?
What Parents Need To Know After DEA Issues Warning About "Rainbow Fentanyl"
New Report Shows 80% Of Pregnancy-Related Deaths Are Preventable
Prince George Reportedly Got Sassy In A Fight With A Classmate