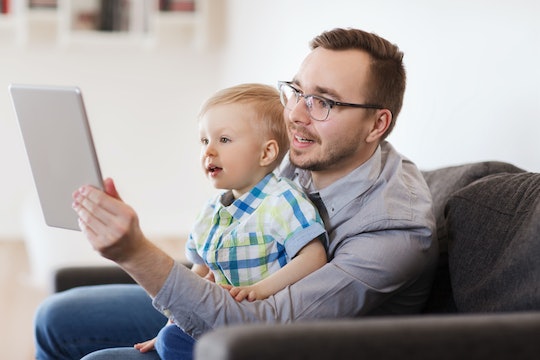 Not all parents have the same reason for exposing their kids to television or video games at young age. But each parent who has incorporated technology into their toddler's life has felt guilty at some point for doing so. That's because studies have found that early tech use can negatively affect a child's cognitive and behavioral development. But a middle ground may have just been discovered: New research has shown that video games won't hurt toddlers, as long as parents join in on the fun.

A new study out of the University of California-Santa Cruz found that 2-year-old kids who played non-educational video games with their parents fared just as well as their physically active peers in cognitive flexibility tests, according to HealthDay News. Specifically, the researchers divided 78 toddlers into three groups (one that ran around, one that drew and colored, and one that played games on their own), and discovered that those gaming kids who invited adults to join in were able to sort objects by shape, then by color, just as well as the kids who engaged in physical activity, HealthDay News reported.

What's more: Those toddlers who played games without adult involvement did just as well on the mental flexibility tests as those 2-year-old participants in the drawing group, the study showed.

Given the scope of our study, we cannot speak towards whether or not using technology as a standalone 'babysitter' — meaning sticking an iPad in a child's hands and walking away — is not to the child's advantage. However, we did see that social interactivity, at least when initiated by the toddler, could be somewhat beneficial.

The research was presented on Friday, April 6, at the American Psychological Association Conference on Technology, Mind and Society in Washington, D.C.

It's worth nothing that those toddlers who were physically active, such as playing ball or crawling through a tunnel, did outperform the other groups on the cognitive tests, according to the APA presentation materials. These findings, then, affirm what a large body of research has already shown: Regular physical activity in early childhood can have a significant impact on a toddler's cognitive and behavioral development, as well as their health.

Conversely, regular use of technology can have a negative impact on their social development, as well as their health. One effect: Pediatricians in the United Kingdom had recently claimed that daily tablet use has affected children's ability to hold pencils and pens properly because of underdeveloped finger muscles, according to The Guardian.

Antrilli does note that this is only an "exploratory" study, and that the differences between the groups were small enough to be "considered insignificant," according to HealthDay News. He continued,

More research is needed, to clarify what role social interaction during touchscreen gameplay has on toddlers' cognitive flexibility.

The need for more research aside, Antrilli's research findings, at the very least, point to a possible middle ground for parents concerned over their toddler's technology use. Parents may not be able to interact with their children every single time they are playing games on their tablet or smartphone, but even some interaction — as opposed to none at all — seems to make all the difference when it comes to their toddlers' mental flexibility.

Of course, you may not be able to change your routine completely. If you're like me, you're trying to juggle work, parenthood, and personal responsibilities all at once, which is why your kid may use a tablet more than you want them to. But knowing that bonding over video games can make an impact should be enough to try.