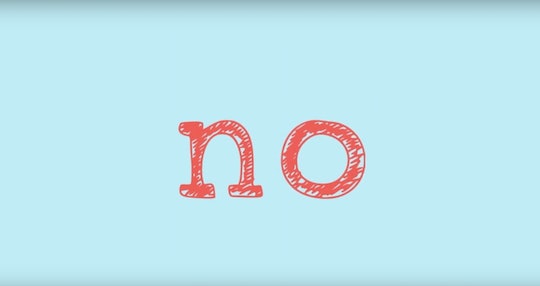 This Kid Saying "No" Is Everything You Need Right Now

Truly good memes go viral because they are super relatable and applicable to nearly every situation under the sun. And never has a meme proved more versatile or encompassed one of the most universal of sentiments so succinctly and effectively as a new, epic video of a 5-year-old saying "No!" The quick clip is only two seconds long, but — trust me on this — it's art in its highest form. That's because the "No!" from this adorable little kid pretty much sums up everyone's feelings about everything, ever.

The soon-to-be meme was born back in June, when a Houston 17-year-old named Naja Lynn Williams was Snapchatting with a friend while eating pizza with her little bother, BuzzFeed reported. To tell the friend "no" in response to a question, she asked her brother to belt out the word and recorded him doing it. And the result — Dellivon Markel Frazier, Jr.'s, dramatic head turn, his wide eyes, his squeaky yet forceful voice — is now basically the stuff of internet legend. Over the weekend, Naja shared the video with friend, who posted it on Twitter along with a simple request: "caption this."

And "caption this" the internet did. The video has garnered almost 50,000 likes and tons of responses.

It's just too good. Honestly, is there a situation in which you can't use it? It works in most cases, like so: When your kids want to stay up past bedtime? "No!" When you ask yourself whether you're really going to stop binging on GLOW and go to bed yourself? "No!"

And tweeters far and wide embraced the new meme for just that reason:

Of course, anyone can say the word "no." But it takes that special something that Dellivon so clearly has to elevate the simple word to a viral meme. In describing her brother to BuzzFeed, Naja noted that he has one giant personality. "He is very loving and caring towards family, but he is a character," she said. So, he was psyched to learn that he'd gone viral, as she told the outlet. "Loook at meeee I'm so happy!" Naja recalled him saying upon learning that he had become a bona fide meme.

The meme game of the first half of 2017 brought us the legendary Salt Bae, Beyoncé ordering off a restaurant menu, and White House adviser Kellyanne Conway looking a little too comfortable on an Oval Office couch. And July has produced perhaps the greatest, most joyous and unassuming one of all: The "No!" kid.