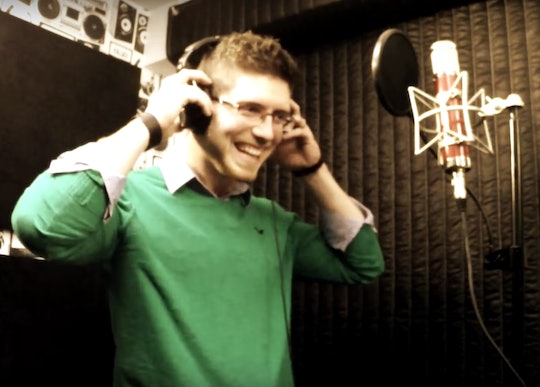 See Video Of Ben Seewald Rapping On 'Counting On'

One of the stars of TLC's Counting On took a spin in the recording studio to count beats — sort of. Jessa Duggar Seewald, of 19 Kids and Counting (but now with her own TLC reality show), shared a laugh with her husband when the couple went on a missionary trip to the south and toyed around with the idea of a musical career. The outcome? A pretty funny video of Ben Seewald rapping on Counting On, which debuted on the network last year.

Ben and Jessa married in November 2014 and just welcomed their second child, a son named Henry Wilberforce, at the beginning of February. Henry joined older brother Spurgeon Elliot, who is 1 year old. Jessa is most well-known for being one of the 19 children of Jim Bob and Michelle Duggar, who shot to fame when TLC gave them a reality show depicting their life raising their children — and eventually grandchildren. The Duggar family are devout Christians, and their rules for their children were fascinating to many viewers who had not had such a strict upbringing — and certainly not one shared with so many siblings.

Jessa, 24, is the couple's fifth child and one of two Duggar daughters to get a spin-off series. Her sister Jill and her husband Derick are missionaries, and they have an infant son, Israel. Jessa and Ben still live in Arkansas, and see the rest of the Duggar clan regularly. After Henry's birth at the beginning of February, Jessa told People that they're hoping to keep on the family tradition of welcoming lots of kids into their home, “It will be a little while since we just had a baby, but adopting and fostering to adopt is very much in our hearts."

In the mean time, there's plenty to keep viewers engaged with their story — including a pretty funny moment from last year that's still making the rounds on the internet. In one episode, the couple went to St. Louis, Missouri, on a missionary trip and met with some Christian rappers, including Grammy-nominated rapper Flame. Ben decided to hop in the booth and drop a few beats himself — and things didn't quite go as planned. Jessa had a good laugh at her husband's "off-key antics," and the team got a kick out of Ben's jam.

In his defense, Ben told the cameras during the episode's filming that the reason he couldn't quite find the pitch was that he couldn't hear himself in the headphones he wore while recording. Jessa wasn't totally convinced, and she had a good laugh listening to her husband "spittin' the bars." In other words, Counting On will probably not be in danger of winding down anytime soon to accommodate Ben's rap career — but maybe he could record a new intro for the show?