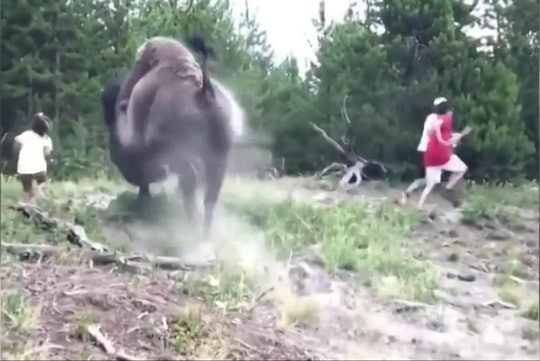 Yellowstone National Park is reminding visitors to stay clear of wildlife in the park after video of a bison tossing a young girl into the air went viral. According to the park, a 9-year-old girl visiting from Florida was tossed into the air by a bull bison on Monday, July 22, after observers got too close to the animal and caused it to charge. While the child thankfully survived the attack, the incident has quickly become a cautionary tale for parents everywhere.

A crowd of roughly 50 people had been standing within 5 to 10 feet of a bull bison grazing near Observation Point Trail in Yellowstone's Old Faithful Geyser area for approximately 20 minutes when the animal suddenly charged, Yellowstone reported eyewitnesses said in a press release regarding Monday's incident. Video of the incident shows that while two people successfully managed to get out of the bison's path, the 9-year-old girl wasn't so lucky. Fortunately, reports claim she was not seriously injured.

The bison appeared to use its head and horns to toss the young child into the air, flipping her what looks like a full 360 degrees before she lands back on the ground. In their press release, Yellowstone National Park reported the child was immediately brought to Old Faithful Lodge by her family where the park's emergency medical providers assessed and treated her. The child was later taken to, and released from, a medical clinic within the park. Specific details regarding the nature or extent of the child's injuries have not been released.

Video of the incident was initially captured and shared on Twitter by Hailey Dayton, someone NBC News identified as a witness to the bison's charge. In an interview with the news outlet, Dayton said she and her family had seen people getting up close and personal with the bison before it charged.

"My brother and I were looking at the hot springs, and we saw a bunch of people running down the path to the bridge," NBC News reported Dayton said in an interview Wednesday. "We saw through the trees some people petting the bison, super close." Dayton told the news outlet that the bison likely charged "because it was agitated by all the people and noise."

"After that, everyone was screaming," NBC News reported Dayton said. "There were a bunch of kids crying."

Dayton has since deleted her video from Twitter, citing what she called "the abundance of cruel and inconsiderate comments that this young girl would most likely see" in a tweet explaining her decision. "This was meant to show awareness of what can happen when not properly respecting the life you are around," she added. In a separate tweet she clarified that she'd been off put by those who'd responded to her video with remarks similar to, "the bison should've finished her off."

According to CBS News, Monday's incident comes more than a year after a California woman was gored by a charging bull bison after crowds gathered too close to the animal as it roamed near Found Paint Pot in Yellowstone's Lower Geyser Basin. According to the news outlet, the woman sustained a hip injury but was otherwise OK.

Although no citations had been issued, Yellowstone said Tuesday that Monday's incident was still under investigation. The park also reiterated the importance of giving wild animals ample space. "Wildlife in Yellowstone National Park are wild," the park stressed in their press release about Monday's incident. "When an animal is near a trail, boardwalk, parking lot, or in a developed area, give it space."

The park recommends staying 25 yards (or 75 feet) away from large animals like bison, elk, deer, moose, coyotes, and bighorn sheep. "If need be, turn around and go the other way to avoid interacting with a wild animal in close proximity," Yellowstone's press release read. Better a grainy photo captured from a safe distance than an injury obtained up close.

More Like This
Exclusive: Three Siblings With Super Powers Protect National Parks In Spirit Rangers
What Parents Need To Know After DEA Issues Warning About "Rainbow Fentanyl"
35 Instagram Captions For All Those Apple Picking Pics
McDonald's Halloween Buckets Are Coming Back To The Delight Of Every '90s Kid