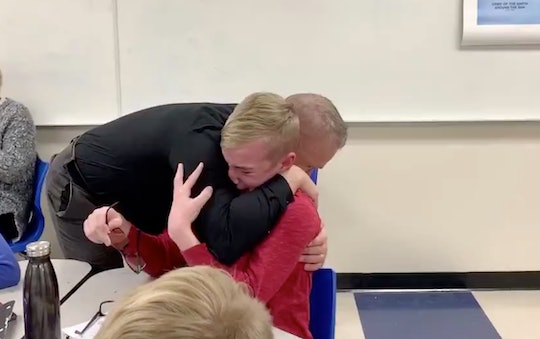 Every now and then, it's important to remember to be thankful for the simple things in life, the things we often take for granted. And a now-viral tweet and video of a boy seeing color for the first time is doing just that and is guaranteed to give you goosebumps. I promise.

It all started when college student, Ben Jones, tweeted a video of his younger brother, Jonathan, seeing color for the first time with the help of some fancy glasses. "My little brother is severely colorblind and so is his principle[sic] at school," Ben wrote on Twitter. "While they were learning about colorblindness in class, his principle[sic] brought in some glasses that let him see color for the first time, and he was very emotional."

In the clip, Jonathan's principal Scott Hanson hands him the special glasses in his Lakeview Elementary School classroom. The Cottonwood, Minnesota student can then be seen gazing around for a few moments before he's overcome with emotion. Hanson gives a teary-eyed Jonathan a big hug, and then encourages him to look at even more colorful items in the classroom, where he continues to see color just like an average person would, completely in awe.

As for Jonathan's older brother, Ben, he got pretty emotional himself upon seeing the video for the first time. "I was in the middle of work when I watched, I almost immediately started crying," he tells Romper. "I had coworkers coming up to ask if I was alright, it was quite a scene." Ben adds that Jonathan is "the sweetest kid in the world" and that he "deserves nothing but the best."

Not long after Ben tweeted the video, which has now been viewed more than 2 million times, his and Jonathan's mom set up a GoFundMe page in order to raise money to purchase his own pair of glasses. Within hours of the page going up, that $350 goal was met, and then some. So far, a whopping $9,871 has been raised.

"After posting a video on social media of Jonathan seeing color for the first time, we have been overwhelmed by how many kind, generous people have wanted to help him get a pair of his own color blind glasses," a message from Jonathan's GoFundMe page reads. "We will use these funds to purchase his own pair and donate any additional funds to a foundation who purchases color blind glasses for those who can't afford them."

Of how quickly the video blew up, Ben tells Romper, "I think that people love a feel good story. And seeing a kid witness the world in color for the first time is as good as it gets."

I'm going to have to second that, Ben. Thanks so much for sharing your brother's special moment with the world — and for raising awareness and funds for others like him.