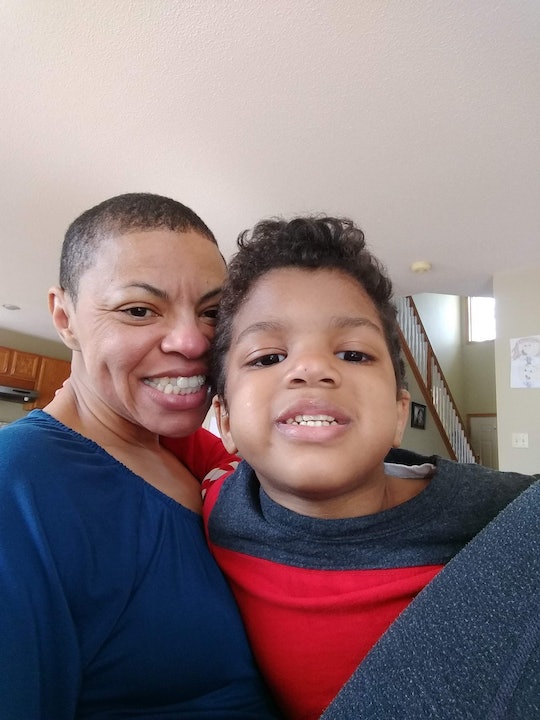 Lil Nas X and Billy Ray Cyrus' hit song "Old Town Road" may just be the song of the summer. The country-rap song is obviously beloved by adults, but it's also brought a great deal of joy to a much younger audience. Not long after Lil Nas X surprised an elementary school with a performance of the hit song, a video of a boy with non-verbal autism signing "Old Town Road" has left people from every corner of the web crying happy tears. The footage was shared by mom Sheletta Brundidge, who caught her 4-year-old son Daniel humming — and later full-on singing — the popular tune.

Brundidge, who co-hosts the Two Haute Mamas podcast on WCCO Radio, tweeted the heartwarming video on June 4, calling the moment a "miracle." She revealed on Twitter that she'd caught Daniel humming "Old Town Road" days prior, and then he "started singing the song on his own." Brundidge also shared in her tweet that his therapists "started to use it in his sessions" in the hopes of encouraging him to speak even more in the future.

The tweet quickly went viral, racking up more than 1 million views in a matter of days, and Daniel's heartwarming story has spread across the internet. Lil Nas X even saw the video, hailing the adorable kiddo "a king."

Brundidge later gave her son's adoring fans some insight into Daniel's diagnosis, revealing that he hasn't "strung together four words since he was born." When he sings, however, he doesn't have that problem. Brundidge noted in a tweet that Daniel has "got all [the Lil Nas X] parts DOWN," while she covers Billy Ray Cyrus' parts. Still, she shared on Twitter that she was shocked to hear him belting out the song.

"You know what he's doing while singing #oldtownroad in that video? Opening and closing the buttons on my 'duster'. Because of Daniel's autism, he can do that for hours without saying a word. So when he started singing @LilNasX's part of the hit song, I was blown away," Brundidge shared in a tweet.

Brundidge and husband Shawn have since decided to incorporate music into Daniel's therapy, according to TODAY, and think it could produce some serious results.

Daniel's story is both inspiring and unique, but he's not the only young person who's a big fan of Lil Nas X.

Recently, the singer popped into Lander Elementary School in Mayfield Heights, Ohio to perform "Old Town Road" for the students, and they went absolutely wild. According to CNN, the decision to invite Lil Nas X came after principal Felecia Evans tweeted a video of kids dancing and singing along to the song during a talent show. Lil Nas X, joined by Complex, surprised the kids with the performance, which he called "the biggest show of my life."

Music is a powerful tool. Combine that with Lil Nas X's star-power and you've got a guaranteed win. It doesn't appear "Old Town Road" is going anywhere soon, at least as long as the younger generation is entranced by the song. Who knows, maybe it'll inspire one of his younger fans to write the next big hit. Can't nobody tell them nothin'.