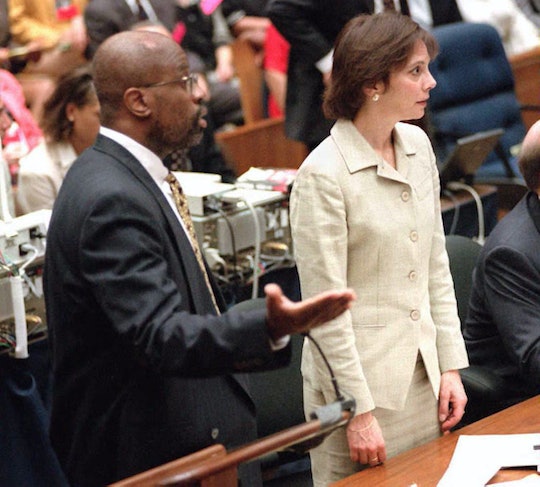 FX's hit new crime drama series The People v. O.J. Simpson: American Crime Story has reawakened public fascination with the O.J. Simpson case and brought it to the attention of a new generation of viewers. News and court proceedings at the time were not able to show the inside workings of the legal process. Thankfully, the new FX series reveals, in a sense, just how much legwork and passion each legal team put into the case. In The People v. O.J. Simpson, the prosecuting attorney, Christopher Darden, is played by Sterling K. Brown. Though his courtroom performances seem dramatized for TV, videos of Christopher Darden's closing argument elsewhere show just how much of himself he had invested in the case.

For those who followed the notorious Simpson trial, American Crime Story is a great way to relive the drama, but somehow even with all its flair, it still doesn't capture the intensity of the courtroom speeches. Raw footage from the original trial is rough, unedited, and lacking the glamour of the screen, but the performances are perhaps even more electrifying because of the knowledge that they really occurred, and that millions of people had watched them live.

Darden's closing argument, in particular, revealed so much about his character and the kind of commitment it takes to shoulder such an all-consuming trial like the Simpson case. It didn't just arrest the attention of a nation or turn a whole swath of people on to the profession of being an attorney — it changed Darden's life. Speaking with Katie Couric in a 2013 interview, Darden explained,

It was insanity for more than a year. And for me, it was new, just like it was new to the rest of the country. And despite my law training and all the years I'd spent in the DA's office trying homicide cases, there was nothing that could prepare me for what happened in the O.J. Simpson case.

In the above footage of Darden's closing arguments (4:18:11), the prosecuting attorney spoke with a measured, even voice that did nothing to mask his exhaustion from the protracted investigation. At one point, Darden even said, "I hope everybody had a good sleep last night. It was a long day yesterday." He proceeded to talk the jury through the entire trial, summing up every bit of evidence brought before the them — even the things they did not get to discuss. He used a timeline to graph Simpson and estranged wife Nicole's relationship, going back years to when they first met and narrating the moments up until her death.

His speech may not have been eloquent; It is not linear, and at times it is not very convincing. But it does reveal how much Darden believed in his arguments. At the end of his statement, he entreated the jury to convict Simpson because "justice is about to perish. Justice is about to be lost", adding "please do the right thing."

Whether you're a diehard American Crime Story fan or simply remember the case from your younger years, check out Darden's closing statements to get a real sense of what the crazed world of the O.J. Simpson case was really about.