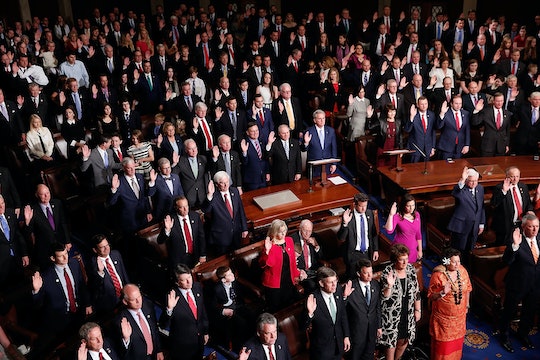 On Thursday, the bill to repeal and replace Obamacare with the American Health Care Act passed the House by a vote of 217-213. In response, a video of Democrats singing "Goodbye" to House Republicans following the vote went viral, presumably a reference to the idea that these representatives will be voted out in midterm elections as a result of their efforts to pass the bill.

The video seemed to showed Democrats singing "nah nah nah, hey hey hey, goodbye," from the song "Na Na Hey Hey Kiss Him Goodbye" written and recorded by Paul Leka, Gary DeCarlo and Dale Frashuer. Democrats were also seen waving goodbye to Republicans, either along with their singing colleagues or in response to the vote.

There was debate early on as to who exactly was doing the singing, Democrats or their Republican colleagues (arguably singing "goodbye" to the ACA, some argued). But even if Democrats weren't the ones doing the singing, by waving goodbye to Republicans from across the room, they were passing along the same message: that the GOP's vote for an unpopular health care bill would get them voted out come midterm election time.

Fortune reported that no Democrats voted for the bill.

According to Business Insider, Democratic House members were in fact the ones singing the "Goodbye" chant, apparently suggesting to their Republican peers that their votes would eventually lose them control of the chamber. That outlet reported that Republican leaders, in contrast, celebrated as they left the House floor.

The AHCA now moves to the Senate, where it will likely have difficulty gaining support there.

The CBO previously reported that, under a previous iteration of the bill, some 24 million people would lose health care coverage under the AHCA, which could be enough to motivate voters to get out to the polls at the midterm elections, where Democrats hope they'll finally win big.

Social media was quick to react to the "Goodbye" moment, though there was some confusion over who led the chants. As mentioned, some were split on who exactly was singing, Republicans or Democrats, or both for different reasons, though it was later confirmed by reporters on the floor that the singing was indeed coming from the Democrats.

If your representative voted for the AHCA, make sure to let them know how you feel about their vote. If they didn't, let them know you appreciate that too. Find out how to contact your senator here as well, since that's where it's headed next.